I have a ridiculous, impossibly adorable two year old daughter. I spend Christmas Day without her. It’s reserved for her father. It’s the only day each year that his entire extended family gets together. It’s Emmy’s chance to see her paternal second cousins, great grandparents and such, much less all of them in one place. Because of that, our custody arrangement sets forth that Dad will have Emmy Christmas Days, indefinitely. I insisted on this, over Dad’s assurance that he was, in fact, willing to alternate it with me. (Even though things didn’t work out between us, he’s a really awesome guy like that.) I have no quarrel with the arrangement, though, because Emmy needs to spend time with her whole family. It’s a good thing for her.

But it doesn’t change the fact that it’s heartbreaking for me. On Christmas morning, I’ll barely have time to feed and clothe her before she goes to her Dad’s. And then I’m alone. Last year was the first that I didn’t spend Christmas with Emmy. Luckily, I had pneumonia and a collapsing lung, so I didn’t really have the wherewithal to process the loneliness. Spending the day by myself on the sofa, under a down comforter was great! But assuming my health holds this year, I’m staring down the barrel of Christmas Day, the quintessential family holiday, without Emmy. I’ll drop her off and come home to…I don’t even know. I have options. I have family on the Northshore. I have friends that I can visit. And I have my faithful bulldog, who will happily snuggle in for popcorn, champagne and a Christmas Story marathon.

It can be nice having a break from parenting on a major holiday. I can wear a dress that’s dry clean only, because there will be no slobbery chocolate milk and sugar cookie kisses. I don’t have to be home for bedtime. I can take a cab, because I won’t need a carseat. I can stay home and bask in the silence of my house. I can work in a 10+ mile run for that upcoming half marathon I’ve been ignoring.  No offense to my family, Argos, or my friends, none of this fills the emptiness, the gash in my heart, that I suffer whenever Emmy isn’t around on days like this. I think most parents agree, the longer you are separated from your child, the more you look forward to going back home to her, to confirming that she’s sleeping safely in her bed. No matter what I do for Christmas, Emmy’s bedroom will be empty.

Everything that’s great about unattached adulthood flies out the window when you know what you’re missing — and I think that’s exponentially true during the holidays. As Emmy gets older, the excitement of the holiday season is going to build for her, an experience for which I’ll only be partially present. I think all parents hope the time they spend with their children is meaningful, and I think that when you know ahead of time that you won’t be around for some milestone event, there’s a need to recapture what you know you’re losing, however you can.

Emmy will have Christmas Day — just not with me. And so I have to construct our own holiday traditions, something that she and I 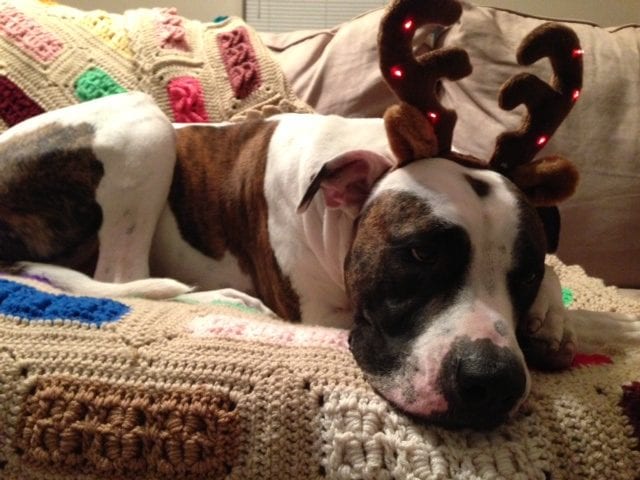 can recreate for years, so that Christmas stays meaningful for us even if we never celebrate the culminating event together. I don’t want to overcompensate for my absence with the Best Christmas Experience Ever: never-ending parties and ponies and a boatload of presents. I want rituals and events that allow us to enjoy the spirit of the season. I’m fortunate that there are so many options in New Orleans, so many events that allow us to create Christmas memories outside the 24-hour timeframe arbitrarily designated as “Christmas Day.”

My goal is to build traditions for her that we can celebrate every year, regardless of the schedule of the rest of the world. This year, we are trying out the Teddy Bear Tea at the Roosevelt Hotel, and the Celebration in the Oaks Run. If one or both of these work out, maybe they become the foundation of “our” Christmas. Nothing too crazy, but something that she can I can look forward to doing together, until she outgrows it or refuses to be seen in public with me. At the very least, something fulfilling enough that being childless on Christmas Day won’t distract me from the spirit of the season, when it matters most.

Kat first moved to New Orleans in 2000, to attend Newcomb College at Tulane University. Despite her best efforts, she could never bring herself to leave New Orleans, staying at Tulane for law school, and then returning to establish her career here as a corporate/defense litigator after practicing law for two years in Lafayette, Louisiana. Kat’s here for good now, having cemented her roots in the city as mother to Emmy, a NOLA girl through and through. Kat co-parents Emmy with her father, but shares in-house parenting duties with her sister Sarah (a pediatric resident — how lucky is that?) and Argos, the best American Bulldog ever.

Why Design Thinking Matters For Girls

Chillin’ With The Villains :: A New Halloween Event from When...