What was once a lovely mid-century modern table adorned with a fresh floral arrangement and pre-set with our fine china is now the battle ground of the war being waged at my house. It is ripe with the scars of a weekend’s worth of uneaten meals: smudges of peanut butter and splatters of yogurt marking the places where Jane once sat visible from the bird’s eye view. If this war was being measured by the havoc it caused, you can include two grilled cheese sandwiches, a cup of strawberries, three yogurts, and two Buddy Fruits in the body count. The collateral damage: my spirit. 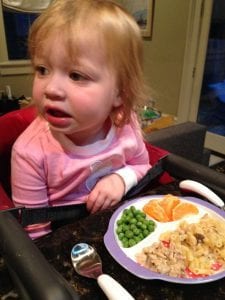 Ok, that is a bit dramatic, but there is most certainly a battle of wills ensuing between me and my two year old. For the last several weeks Jane has been rejecting her meals left and right. There is something so demoralizing as a parent when your child refuses to eat the meal you prepare for them. It leaves you with both fear and frustration – the fear that they are not getting the nourishment they need and, well, I don’t think I have to explain the frustration.

Before I had a child, I had a lot to say about how a child should be fed. Of course, before I had a child, I was the best parent I knew. My child would sit at the table with me and eat a mini-portion of the meal I prepared for Mark and myself. Meal time would be filled with laughter and joy as we all nibbled on our plates of grilled redfish, brown rice and asparagus. The thought of spreading some kind of condiment on a piece of white bread and calling it a meal qualified as child abuse.

Ha! That laughter you hear is not the sound coming from my dining table. It is the sound you hear when Mark and I reflect on how little we knew about what parenting was like on a day in and day out basis. It is hard, and it is exhausting. And when you combine that with the long hours he spends on call or at drill and I do at the office during tax season, it makes the work of parenting feel, well, like work. Don’t get me wrong; it is the most enjoyable and amazing thing I have ever done – most of the time. But, when Jane has gone three days sustaining her precious life on whole milk and Pirate’s Booty, it can make you want to bang your head against a wall. P.S. Someone please call the medics – I think I may have a concussion.

So, where do I go from here? I don’t even think I have the energy to raise a white flag. If only Pancho’s was still open, I could borrow one of theirs and just tug on the pulley when I’ve surrendered. For now, I keep telling myself Jane will eventually call a truce. Surely, she won’t go to college eating only microwavable Kraft mac-n-cheese.

Of course, when you actually think about it, college students eat much like toddlers (I microwaved every meal), so maybe there’s no point in worrying at all.

Are you frustrated by your picky eater? What tips can you share?

A New Orleans Girl’s Guide to the Best Margaritas

What a Tease: When My Preschooler was Teased at School