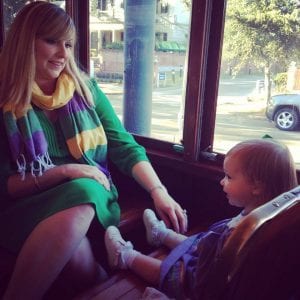 I grew up in family where both parents worked. My dad had a flexible schedule that allowed him to drive my sister and me to ballet and coach our cabbage ball teams; however, my mom was a CPA whose job demanded more of her time. And rather than resent her for that, I wanted to be just like her: strong, smart, important, accomplished. So, I went to Loyola and received a degree in accounting, and I got my CPA license not long after that. I chose to practice tax accounting at a big firm and live a professional life that is defined by the unrelenting stress of impending deadlines.

So when I announced that I was pregnant I suppose I should have expected the onslaught of questions related to whether or not I would continue to work after the baby arrived. I mean, how could one possibly be a good parent and work 55-65 hours a week upon returning from maternity leave? And before this child in abdomen had even reached the size of a lime, I gained an understanding of the deep and painful feeling of “mommy guilt.” It had never occurred to me that I wouldn’t be returning to work full time, but each time I was asked that question, I began to doubt my choices and myself. So much so that rather than the confident response I initially replied with, I began saying “yes, I will be going back to work” with an apologetic tone and a sad tilt of my head.

It has taken me two years, a lot of tears, and some really great advice, but I am entering this tax season as a working mom who has shed her “mom guilt ways.” So, humbly, I say, “Here they are!” Here are the things that have helped me go to work guilt free.

I remember standing in my colleague Debbie’s office with a tummy as large as any you’ve ever seen. I was four days past my 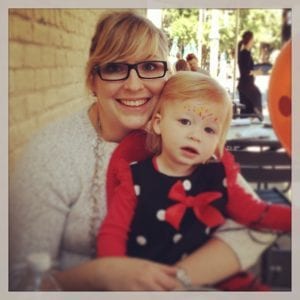 due date and so ready to meet my baby. But as long as that baby was in there, I didn’t have to face the reality of balancing a baby and a job. So I gathered the courage and the strength, and with tears welling in my eyes, I told her how scared I was that I wouldn’t be able to do it all. And she looked back at me and said, “You won’t. You won’t be able to do it all. But that’s okay. You will find a way to do the things you need to do each day. You will have to give some things up, but you will get a lot in return.” And she went on to tell stories of how she found her way as a working mom. Just knowing that there was someone in my office, who I wanted to model my career after, who was willing to share her advice, life lessons, mistakes and successes with me made this journey feel less lonely. I now try to seek out the new moms in my office and let them know that if they hit a rough spot or have a bad day, I am happy to lend an ear. We can be each other’s resources rather than each other’s critics!

If I had to measure my successes as a mother in the number of hours a day I spend with Jane, I would likely be considered a failure. I knew in choosing to work that our time together would be limited, so I try not to tally how much togetherness we’ve had. Rather, I try to make the most of each and every moment we are together. This doesn’t mean that I roll out the red carpet and perform for her (although I do an incredible monkey impression). It simply means that I try to take each moment we spend together as one in which we can learn and grow and laugh and smile together. If we are driving to school (in radio silence), I will make a game of seeing how many flags we can spot flying on houses. If we are walking past a rose bush, I will stop so she can tell me what color the bloom is and talk about how thorns are prickly. And prickly rhymes with tickly – and then we have a mini tickle session. I try to be in the moment with her to see the world passing by just as she does. And each and every night (no matter how tired I am) I will take her to her room and rock her and read to her and sing her a song. It is our time, and it is precious.

Find Humor in the Horror 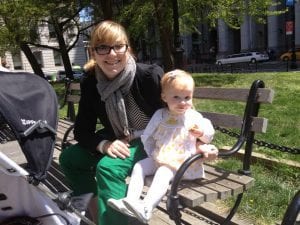 One Monday morning early last April, I found myself alone with Jane and our dog Beignet. That is not a desirous position for a tax accountant. I was running around trying to get everything ready so that I could get to work early, and just as we were about to step out of the door, I realized Jane had pooped. For a moment, I thought about trudging forward poopy baby in tow and dropping her off as if the poop occurred in the car. But, I just couldn’t do it. So I ran her into the other room and began changing her diaper when I realized I didn’t have a fresh one. I threw the poopy diaper by the front door so I could remember to take it out to the trash and hauled her up to the nursery for a new one. Whew! Time to scurry downstairs, grab our bags, and go. But, wait, where was the dog? Had I let her out and forgotten? “Beignet, Beignet,” I called. And that’s when I saw it. Out of the corner of my eye, I saw pillows of white fluff scattered across our living room. For a moment I couldn’t figure out what had happened. Until I saw Beignet sitting, tail down, with a solemn look on her face. And as I approached her, it became clear that she had taken the poop diaper and torn it apart. To this day I try not to think about the fact that there was no poop to pick up. I put Jane down, put the bags down, and cried. And cried. And cried. Why today of all days when I was on my own trying so desperately to get to work before seven so I could get home in enough time to kiss Jane goodnight did the dog have to $hit on my plans? It has taken time, and several retellings of this story, for me to be able to laugh at myself. But if we couldn’t find the humor in the horror of trying to make it all work, then life just wouldn’t be all that fun.

I have commonly heard my working mom friends say that they feel guilty for not feeling guilty enough for choosing to have a career. WHAT?!?! Why do we do this to ourselves? Why is it not okay for a woman to stand up and admit that what she really wants is an incredibly successful career in a challenging profession?

I was recently having a conversation with a young woman who explained to me that none of her friends want to work the kind of hours it takes to make it in industries like law and accounting, and that that was a generational difference that the business world would have to come to terms with. When I laughed at her use of the term “generational” (as it suggested I was incredibly old at the ripe age of 33), she said, “Well, you’re just different in how you really want to get promoted.” Her tone indicated that for someone like me, you know a mom and all, to acknowledge that, YES! I want to succeed, was a strange and crazy thing. I think we need to change that perception. We need to stop telling ourselves that we are bad moms for wanting to succeed! If each of us acknowledged outwardly that we want to grow professionally, I think we would find a support system that doesn’t exist right now. We’d talk about our achievements and our successes and even our failures. We’d share our tips on balancing everything in our life. We’d feel supported and uplifted by each other, and we’d find a way to break free from the impression that wanting make to partner means you don’t want to be a good mom.

I think perfection is at the root of all mom guilt. Jane’s first day at school happened to be her class’s Halloween party. I 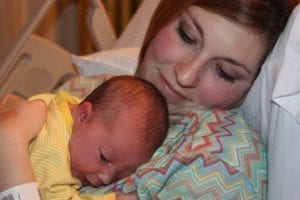 received an email the day before the party asking me to bring a snack. I immediately pulled up Pinterest and went through page after page of Halloween snacks. None of them looked like something Martha Stewart would have brought to her child’s pre-K 1 class. I saw mummies made from pretzels – but did these kids even have teeth yet? I saw oranges that looked like pumpkins – but didn’t I read somewhere that citrus was bad for toddlers? Finally, I came upon a recipe for Cinnamon Cake Donut Muffins. Perfect! So that they wouldn’t be anything but fresh, I woke up at five the morning of the party and baked and baked and baked. And off I went to her school with 24 of the most perfect muffins you’ve ever seen. I expected that the other moms had done the same and imagined placing my wares on a table surrounded by out-of-the-oven snacks. Instead, my muffins were directed to a spot on the counter where they coexisted with store bought cupcakes and pre-chopped fruit salad and a box of Goldfish. Was I really the only one who made something from scratch? How did these moms know that it was okay to run to the store and scoop up the only thing their kids actually eat? I wonder if they feel guilty for not slaving over Pinterest perfect muffins? But, as I looked on, they didn’t seem to. They were having fun and chatting and no one seemed to notice that the things their kids were eating didn’t coordinate with the party theme.

Now, that was not the last time I have made snacks from scratch. I love baking. But, it was the last time I felt like I needed to turn my world upside down to bring the best snack of the bunch. And I have to say that letting go of the feeling that I had to be this perfect mom was the best thing that could have happened to me. Being perfectly imperfect is so much more fun – for me and especially for Jane.

Have you struggled with working mom guilt? What do you do to get past that feeling?

Daddy is Our Hero: A Military Spouse’s Appreciation for Our Independence

For Your aMUSEment: Get a Peek into My Day with The...