And Maxwell Alexander. And just a moment later, Joseph Matthew.

The babies – that’s four boys and one sweet girl – were born at 27w1d gestation, all weighing between 1 lb 8 oz and 2 lbs 8 oz. They were delivered by Dr. Stacey Holman at Touro Infirmary and are currently doing well and getting big and strong in the Neonatal Intensive Care Unit (NICU) there.

I was able to take a few moments of Nadia and her wife Liz’s time to talk about their precious children.

How did y’all meet?
Nadia: We met in Atlanta in June of 2008. I asked Liz out to lunch after a mutual friend at work confirmed she was single. We had lunch the very next day and have been together ever since. 5 months later, we moved into a new apartment together. Three months after that, we were engaged and married that summer in August.

How did you end up in New Orleans?
Nadia: Liz works for the Hyatt. As she moves up in the company, we move to a different city. She has been with the company for 13 years.

How did you feel when you found out?
Nadia: Honestly, I was numb and wasn’t sure how to feel. I was not happy about it at all. I was nervous about bringing five lives into this world, let alone the fact of carrying them to term. Fearful of the risks that came with a high-risk pregnancy I know are great. I was also unsure of how the two of us would raise 5 children of the same age at one time. It took me about 3-4 days to grasp the fact that I was going to give birth to five babies. After the initial shock, I began to become excited about becoming a mom. I’ve always wanted a handful of children but never did I imagine I would ever have five little ones at one time. I felt that if God would bless us with this pregnancy, with five at one time, why should I be afraid. A blessing like this is one to cherish, not to be fearful of.

Liz, how about you?
Liz: I was excited and anxious at the same time. I have always wanted a big family, however, I did not think it would happen at one time.

Nadia, how did you feel, physically, throughout your pregnancy?
Nadia: At first it was fun to know that I was carrying quintuplets. Around the 4th month, I began to get extremely tired when on my feet for short periods. I couldn’t grocery shop without having to ride on an electrical scooter. At night, my hips were very painful. I had to use Liz’s assistance to get out of the bed several times throughout the night to use the restroom. Just to do this brought on so much pain in my hips and joints. Eventually, I ended up sleeping in the recliner in the nursery because that was the only way to get any relief from the pain. I slept a lot and ended up leaving my job because the physical aspect was too much on my body. I’m so grateful to have a very supportive wife who supported me tremendously then and now. I am a very lucky woman to have her.

Liz, how did you the pregnancy affect you?
Liz: Witnessing Nadia’s strength/stamina during the pregnancy made me respect and love her even more. The pregnancy confirmed what we already knew; together we can accomplish anything. 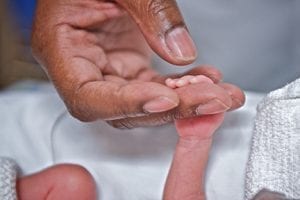 Tell me how you both felt when you found out you were having four boys and one girl.
Liz: I was always excited about our B-Ball team. Boys or girls, it did not matter to me. I was praying for healthy babies.

Nadia: I wanted all girls and no boys. I didn’t know what to do with boys. We found out at about 22 weeks that I was carrying 4 boys. The last baby would not open the legs so we could see. I was very nervous that they would all be boys. Two weeks later, we confirmed that the last baby, baby “E”, was indeed a girl! I was excited to have at least one. Once the babies were born, I instantly fell in love with them all. I can’t believe that at one point I didn’t want ANY boys and now, I can’t imagine it any other way. I’m so in love with my boys. I’m actually more tender to them when they cry as opposed to my baby girl. Go figure!

How did you come up with their names?
Liz: Other than Dawson and Elizabeth which were no-brainers, we took our time. We wanted strong names to support the strong personalities we knew were inevitable.

Nadia: Dawson is my maiden name and his middle name, Aidan, is my name spelled backwards. Since he was the first to be born and the one that was most active, like myself, we named him after me. Elizabeth Anne ll, is named after Liz (Mommy); Maxwell Alexander, Joseph Matthew and Micah Quinn are all names that we love. We spent months picking out names, and mixing and matching them until they were perfect. It wasn’t until about the 23rd or 24th week when we made the final decisions. Funny thing as well is that Joseph Matthew is the name of the MFM (Maternal Fetal Medicine) doctor that took care of us from 24 weeks up until the delivery. 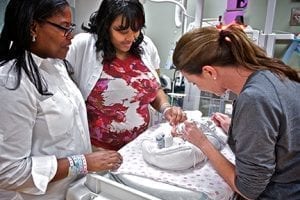 Are you starting to notice personality differences between the babies?
Nadia and Liz: Yes! Dawson and Maxwell both are very vocal. When being burped, they both make grunting noises which sound identical. Maxwell also smiles a lot. Whether he sleeping or awake. Joseph is our baby that likes to take his time. He was the last to do everything. The last to come off oxygen, the last to start bottle feeding, the last to some off of the “billy” lights. He also fusses a lot. Not really big cries but fussy, sweet cries.

Micah knows what he wants and what he doesn’t want. If he doesn’t want to be bothered, he will let you know. Elizabeth is our princess. She also is one that tells you what she wants. The nurses often say she is very opinionated. If you’re changing her, or giving her a bath or even flipping her position in bed, if she doesn’t like it, she frowns. She is also very dainty. If you have ever seen one of those silent movies from the black and white era … the women in those films are the best way to describe her movements. Very girlie she is.

How did your doctor treat you during the pregnancy?
Liz: The doctors were honest with the potential issues we could face but always optimistic regarding the outcome.

Nadia: Dr. Holman, hands down, is phenomenal! Words can’t express the gratitude we both have for her. From the very beginning, she was very attentive and personal with the care that she gave me as her patient. If I needed anything, she was always a phone call, text and/or email away.

As we approached delivery time, we were meeting with her and the Touro staff every Thursday. From the nurse practitioners to the Head of the NICU all the way over to management. She wanted to ensure that we were comfortable with the entire delivery to recovery. This has since made us a part of the Touro family. Because of her, everyone knows who we are in the hospital. Touro truly feels like home away from home. We have developed a relationship that is very unique and special that I will always cherish. She has a place in my heart where it’s warm and fuzzy. We named her “Momma Stork” just days before the delivery. A name that our children will know.

While I can’t really compare having triplets to having quintuplets, I know that having more than one baby at once is an expensive proposition. The family has an account set up at Capital One in the name of Elizabeth A. Harris for donations.

Congratulations, Nadia and Liz, on your beautiful family!