From the moment we started talking about expanding our family, I knew I wanted to breastfeed. I had listened to friends talk about their individual successes and struggles with nursing their babies, so I realized there was no guarantee it would be successful, but I definitely wanted to try.

When I started experiencing complications during pregnancy, I didn’t give breastfeeding a second thought. I figured it just wasn’t in the cards for me. I mean, how would I be able to breastfeed a baby who was at the hospital while I was at home?

In an effort to feel less alone, I searched endlessly for stories of women who had experienced the same complications I had. I didn’t necessarily find exactly that, but what I did find were blogs written by other preemie moms whose babies were growing and thriving! I felt like I had hit the jackpot. The chances of my baby being born prematurely were basically 100%, so I devoured their words to learn more. In reading their stories, I learned that these preemie moms had successfully pumped for their babies to receive breast milk while in the NICU. And I just knew I could do the same for Addison.

After she was born, our daughter was whisked off to the NICU, and I was wheeled down to recovery. The nurse there explained to me that once I was in the Mother/Baby unit, there would be a pump set up in my room, and the lactation consultant would be by to meet me. Just a short time later, I met Nikki, my lactation consultant, who showed me how to use the pump and gave me preprinted labels with barcodes to mark the bottles. It wasn’t even twenty four hours before I had her phone number memorized. While still in the hospital, my milk came in. Not a lot, but it was there. As soon as I filled each little bottle with less than an ounce, it was labeled and immediately brought to the NICU. After she was born, Addison was being fed through her IV with TPN (total parenteral nutrition) around the clock. Once she was able to tolerate feedings, she was able to receive my breast milk through her feeding tube. The nurses also added some fortifier to my milk to make sure she was receiving all the nutrients that she needed.

I pumped religiously every two to three hours but was never able to produce more than two ounces total each time, even after two weeks had gone by. I had an entire shelf in my freezer full of bottles that weren’t more than half full to deliver to the NICU each day when we would go visit. I was envoius of the other moms who would walk in carrying bottles FULL of breastmilk when I would go visit Addison. Why were they able to produce so much while their babies were in the hospital, and I couldn’t?

Like I said, Nikki was basically on speed dial, and she gave me suggestions to try to increase my supply. I took fenugreek (four times the recommended dosage) until I smelled like maple syrup. I HATE syrup. I ate oatmeal four times a day. I drank so much water that I basically lived in the bathroom. Anything she suggested, I tried. We did kangaroo care at each visit, hoping the skin to skin contact would serve two purposes: to help Addison grow and develop and to help me produce more milk! 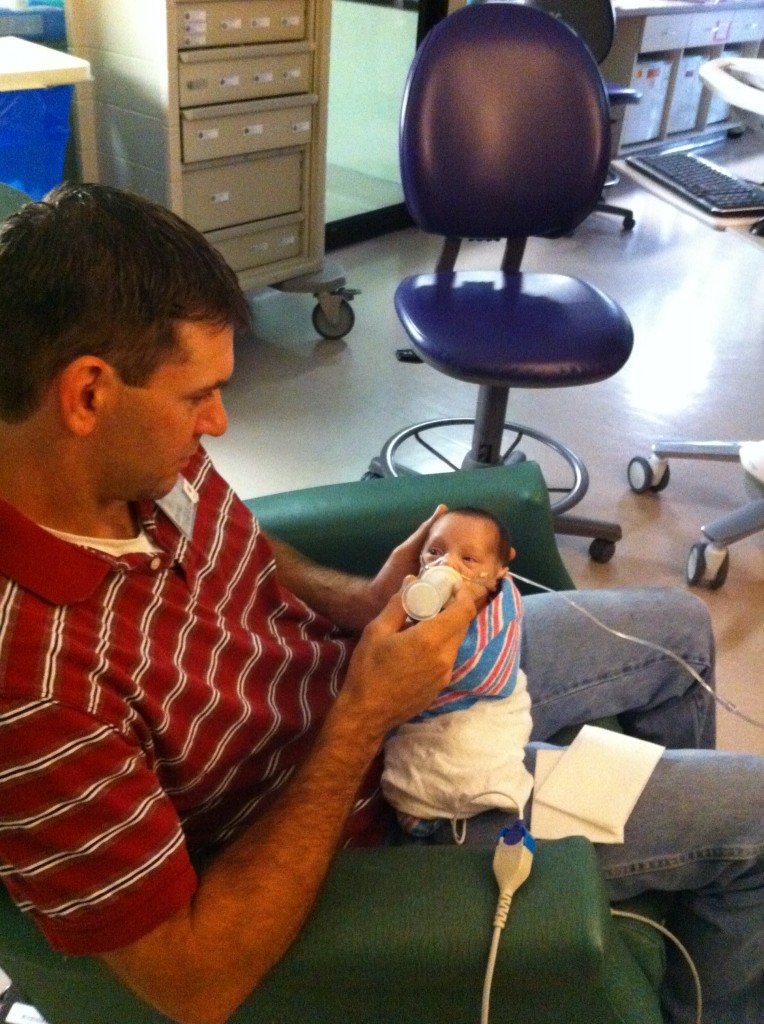 Nikki would remind me that some moms just aren’t able to produce a lot of milk and that being under stress would certainly affect my milk production. I tried to tell her every time that I wasn’t under stress. She would just look at me doubtfully, as I finally had to admit to myself that I was stressed. My baby was born prematurely and in the NICU more than an hour from where I lived. Between pumping every few hours, traveling to visit, and being concerned for Addison’s health, to say I was stressed was an understatement.

After numerous meltdowns and constant encouragement from Michael to not think about what others were able to do, but to do what was best for our family, I knew my pumping days were over. I was heartbroken that I would not be able to continue, especially since I felt like breastfeeding Addison was how we would seal our mother/daughter bond when she came home. Nikki, along with the nurses, kept telling me two things: Addison was able to get the colostrum, which was the most important. And since she was eating such a small amount at a time, she actually received my milk for much longer than the two and half weeks I pumped.

There are still times when I still feel sad that I wasn’t able to continue pumping for the sixty days she was in the NICU, and I wasn’t able to breastfeed at home. But the more I tried to increase my milk supply, the less I seemed to produce. It wasn’t healthy for me, physically or mentally, and I needed to take care of myself for me to be there for her. And today, she may not be the best eater in the world, and she might only be in the fifth percentile for her age, but her little personality is off the charts!

Will we have more children?