There is a group of mommies that exude more strength, courage and composure in a very difficult situation, and you often wonder if you could do it but you never really want to find out. I joined that group on September 20, 2013, and I discovered what it takes to survive having a sick child in the NICU:

My son, Ryder, was born at 25 weeks, weighing just 1 lb, 12oz and was 12.5 inches long. Three days prior to his arrival, my colon ruptured, and I had to have emergency surgery to save mine and my unborn child’s life. The moment my colon ruptured and I cried out to God for help, I had a peace come over me that I have never experience in my life. That peace would carry me through the scariest rollercoaster that I have ever been on … the NICU.

For 12 days, I remained in the hospital recovering from surgery while my son was transferred to Children’s Hospital so he could be placed on a special ventilator. In the first 12 days of his life, I had only seen him twice for a total of about 2 minutes, once just after he was born and once just before they put him on the ambulance to go to Children’s.

Those 12 days were excruciating.

Before this event, I would consider myself a worrier, especially when it comes to my children. But this time was different. While I longed to hold my sweet boy, I had faith and was at peace that he was ok. I trusted that his care was in God’s hands, and it didn’t matter how much I worried. God had a plan and was in total control, and I was ok with that. My faith in Christ grew by leaps and bounds in those 12 days so much so that I felt a touch of guilt for not worrying enough about him. I had faith in my family that was checking on him, asking all of the right questions, and making sure he was getting everything he needed. I had faith in the trained doctors and nurses that were caring for him.

I was living off of my faith and the peace that can only come from my Him. 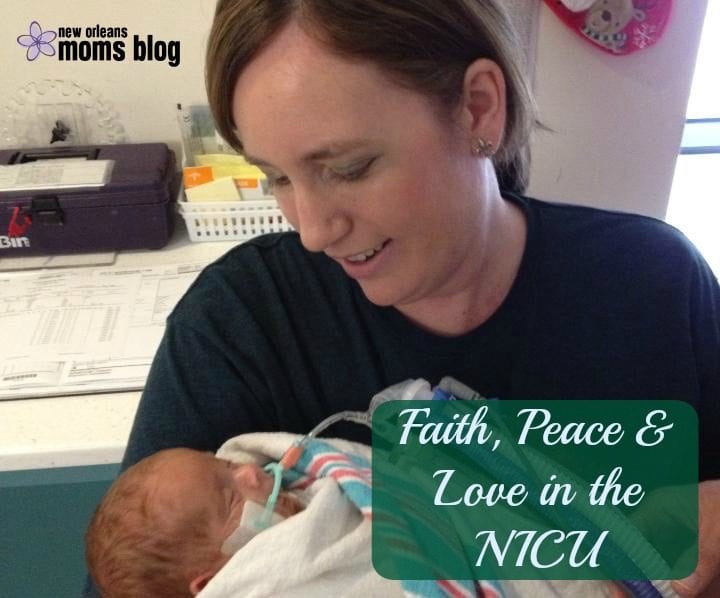 On October 2nd, I was released from Touro and made a bee line to Children’s Hospital. This was the first time I really got to get a good look at him, and he was perfect. For the first time, I touched his little head, feet, and hands. I finally got to meet some of his doctors and nurses that were taking care of him in my place. I finally got to sit there and marvel at this miracle that God gave me.

Having a child in the NICU can certainly leave you feeling helpless.

Most of the time you are standing off to the side watching doctors and nurses care for your child. Your motherly instinct tells you to get in there and take care of him. And while that does eventually happen once his condition is better, reality is, in the early stages there is only so much you can do. Other than learning as much as you can about what is going on with your baby and try to understand and make sense of all of the medical jargon, there is only one thing you can do. And that is love on him like only a mother can.

And then it happens: the day arrives when a respiratory therapist asks you if you would like to hold him for the first time. She gently handed him to me, carefully handling his vent and after 45 days of waiting, I was holding my miracle and my love for him soared to a new level.

We spent a total of 145 days in the NICU and as badly as I wanted my family under one roof, I am so thankful that I was able to witness such a miracle and go on this journey with my family. As hard as it was to see my son so sick, I am thankful that God has made him a fighter, and I know that there is absolutely nothing that he cannot do.

We were a complete family with mom, dad, big sissy, and little brother. Ryder celebrated his 1st birthday in September; he is a whooping 16lbs and only requires a little bit of oxygen to help him to continue to grow.

A little over a year ago, I never dreamed I could be one of those strong moms that overcome so much. But God had different plans for me, and He revealed them in a big way. I pray that our journey of faith can encourage someone going through a similar journey but most of all, give glory to God. 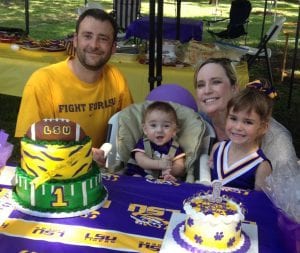 Lindsey is a lifelong resident of St. Charles Parish who grew up in Mimosa Park for all of her 34 years. Married for 7 years to her Firefighter husband who is one of the most hands on dads she knows (AND he does laundry ladies!). God blessed them with two beautiful gifts: daughter, McKinney, 5 years old and their latest miracle, Ryder who turned 1 in September.

Five Things to Look for During Your Next School Visit

What It Means to Be a Father {It’s Better than the...