My husband and I always knew that we wanted a big family, so when we found out we were expecting the month after we were married, we were ecstatic. My due date was mid-November. My pregnancy was uneventful and going great. However, on August 12th, I started having what I had thought to be Braxton Hicks contractions. By the next day, they were so bad, they were “stopping me in my tracks.”

Being only 25 weeks, I wasn’t too alarmed, but I went to the hospital to get checked out anyway. 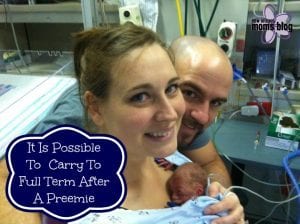 When we arrived the nurse thought that I was just dehydrated and needed fluids. They started an IV and attached a fetal monitor to measure the contractions. After about 20 minutes on the monitor, the nurse checked me to see if I was dilated. I was 4 centimeters dilated, and she could feel the baby. I was put on strict bed rest and given magnesium-sulfate to try to slow down the contractions. The next day, my doctor decided it was time to deliver. My blood count was dropping; she knew I was bleeding but she didn’t know from where.

On August 14th,  Annabelle was born via c-section. She weighed 1 pound 11 ounces and was 12.25 inches long. She was in the NICU for 100 days. We roomed in on Thanksgiving Day, and she came home the next day. While she was in the NICU, she had IVs, X-Rays, blood transfusions, an infection, feeding issues, and breathing issues.

When Annabelle was 10 months old, my husband and I found out that we were expecting baby number 2. 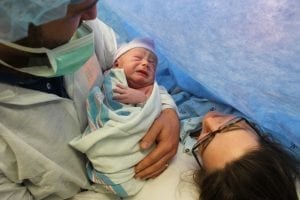 While we were very excited, we were also very scared. The doctors were not sure of the reason I went into labor so early with Annabelle so we needed a plan to prevent another premature birth. At 16 weeks, I started weekly progesterone shots and cervical checks. I also saw a specialist every other week. Every week that passed was a relief, especially when I made it to week 25. I was scheduled for a repeat c-section for week 39. At exactly 37 weeks, I went into labor. On February 24th, William was born via c-section. He weighed 6 pounds 12 ounces and was 18.5 inches long. I heard him cry and got to see him right after he was born.

It was a very different situation when Annabelle was born. She was not crying and I didn’t get to see her until the day after she was born.  William came home with me on day three.  It was wonderful to be able to leave the hospital as a family.

My advice to anyone thinking about having a baby after a preemie is to have a plan.

I think if my doctor would not have taken all the precautions that he did, William’s birth story could have been very different. Even with William being born full term, it is not guaranteed that all future pregnancies will be full term as well. However, I do know that when we decide to have another baby, my doctor and I will have a plan in place. 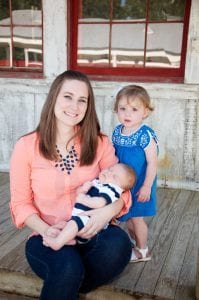 Christina grew up in Chalmette and moved to Metairie following hurricane Katrina. Shortly after her move, she graduated from UNO with a B.S. in Psychology. In February of 2012, she married her husband William. At the time of the birth of their first child, Christina left her job as an insurance producer to become a stay-at-home mom. Shortly after, Christina and her family moved again, this time to Madisonville, where they now currently reside with their two children Annabelle (2) and William (8 months).

tasc Performance :: Give the gift of bamboo this holiday season!

Three Ways to Waste The Rest of Your Summer Stressing Over...