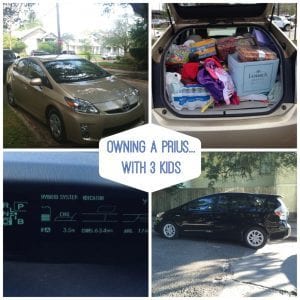 Usually when you have more than one kid, the great car debate starts. Do we get a SUV or minivan or keep the sedan? Well, in our case, we went in the opposite direction. When we had just one child, my husband insisted on a minivan. But I hated it. It was so big, and all of the conveniences people talk of didn’t feel so convenient to me when I was paying a gajillion dollars in gas to ride it around. Our lease was up when I was pregnant with our second child. I begged and pleaded to get something smaller. Much smaller. I wanted a Prius. Yes, I wanted to downsize from the huge minivan to a Prius. Space and automatically opening doors be damned!! Give me my car that I only need to take to the pump once a month!

My arguments were simple: two kids and a stroller could fit in the back of a Prius, along with groceries.

We would save money on gas. And, the Prius costs about as much as a minivan, so why not? When we went to test drive, the man at the lot initially thought we wanted a van and was shocked to find us downsizing. But from the moment, I pushed the button to turn on that silent vehicle, I was in love. Serious love. And I have never loved a car. I drove it around for a bit and was in awe of the amazing details of the dash that showed me how efficiently I was using gas. The hatch back was so roomy! I could fit my Babyjogger City Select (with both seats) and still have room for a Target run. The back seats had plenty of room for two carseats. Of course, it meant that the whole back seat would be used for carseats but, being that we have no family in town and are rarely taking anyone anywhere, this wasn’t a deal breaker. My husband took it for a test drive as well, and he fell head-over-heels, just the same as I had. A few hours later, we signed the paper work and were on our way with a brand new Prius. Fact: My husband loved my new Prius so much, that the same afternoon, he actually rode back to the Toyota dealership and traded his car in for a second Prius!! But he ended up getting the slightly bigger Prius V.

After two blissful, Prius-loving years of low gas costs and silent driving, a real wrench got thrown in our plan.

I unexpectedly became pregnant with our third child. We were in a definite pickle. Do we do what many three children households do and get the van or SUV? Or, do we (gasp) keep the Prius? We debated the topic for about 5 minutes and decided we will keep the Prius. After looking at the measurements of the back seat, we realized it was completely possible to fit three across using carseats that were narrower than the Britax ones that we currently used. Will my kids have tons of space? No, but this is not something that I cared too much about. We don’t go on very long road trips. I think the longest stretch we can all last in the car is 5 hours.

But we had yet another test to see if the Prius was really the care we wanted for our soon to be family of 5.

About a month ago, I walked out of my house to go to work to find my beloved car was stolen. I was devastated. Of course this brought out questions like, “Well now at least you can replace it with a minivan or Suburban?” Um, no. I consider myself pretty liberal and eco-conscious. But I swear my motives behind the Prius are not all political. I truly hate going to the gas station. And even more so, I hate trying to navigate the narrow streets of New Orleans in a car that is about as wide as the street. Plus, nothing annoys me more than seeing large cars improperly parked (or Pig Parkers as we call them in my house) at Whole Foods. I did not want to be that person. After we settled everything with the insurance company, we were off to the Toyota dealership once again. This time, there was no test drive involved. I picked the car off the lot that had leather interior and the features I wanted. After 3 hours of chasing entertaining the children, I was happily driving away in my brand new 2014 Prius.

Are you team minivan, SUV, or sedan?

The Perfect Way to Celebrate Chanukah