I believe there is a Disney difference. It’s what makes it the difference between the “Happiest Place on Earth” and any other theme park.

We recently sailed on the Disney Wonder out of Port Canaveral to Castaway Cay. While I have cruised before, this four day cruise was a very different experience from past cruises. I have sailed on other ships with kids in tow, but there are things that are separate and distinct about a Disney ship.

So, is a Disney Cruise really worth the hype?

I say yes and here are my reasons why.

My first reason is that there are separate areas for kids and adults. While a Disney Cruise is tailored to kids, there are distinct areas that are for adults 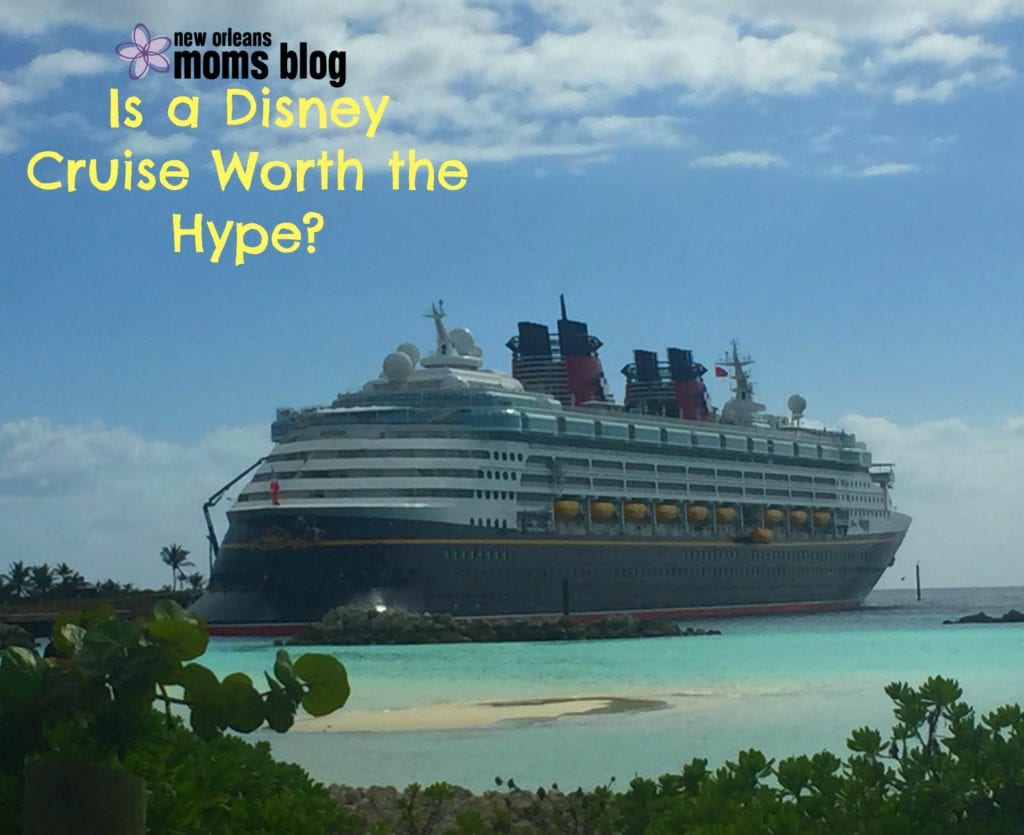 only. And I am not talking about just a bar area. Yes there are those, but I am talking about a full pool deck, a coffee shop, smoothie bar, reading area with padded lounge chairs starring out at the sea where you and a good book could get lost – but I digress. There are areas of the boat where kids can be kids and there are areas just as good where parents can relax and unwind kid free.

My second reason is that it’s a Disney experience after all! I found that people were more tolerant of kids on this cruise. While there were mostly families and extended families on board, people knew that kids were going to be kids. That for me made the entire experience more relaxing than worrying if my kids were stepping on the toes of a bachelorette party two chairs over. Plus, people go the extra mile for magic. The cabin doors are elaborately decorated by the families. My kids had a blast hanging up their door décor, and it adds to the atmosphere.

This ship was built for families, literally. From the exceptional kid’s club and nursery to the fact that the in-cabin bathroom is split in two. What that means is that Dad can take a shower while there is still access for the kids to potty in a separate bathroom space (with a separate door!). Each bathroom space has a sink which makes teeth brushing in the morning a breeze. Each room also gets complimentary Wave Phones (think cell phones) to use on board. This allows you to keep in touch with your kids and others that you are traveling with. No more running around the ship trying to find each other.

The planner in me loves a Disney vacation because all of the work is upfront. You make selections ahead of time from your couch in front of the TV with a glass of wine. Then when you arrive at your vacation, all of the work is done … you only have to enjoy yourself. When you arrive at the port, there are characters to greet you and final check in to be done. It is easy and it is seamless. And when you go to disembark after your cruise, there is no waiting for colors to be called on the loud system for when you are allowed to leave. On a Disney ship, you simply have breakfast at your leisure and walk off when you are ready.

We flew to Orlando a day early to sneak in some time at Magic Kingdom where we focused on rides and not so much on the characters. On a Disney Cruise, the characters are there throughout the cruise from sun up to sun down. You can catch almost any character you want to see with VERY minimal wait times … I am talking 10 people in front of you. For kids, it is like seeing a familiar face as they are so accustomed with the characters from meet and greets to show times and even the characters that visit the Kid’s Club for play time.

For us, a Disney Cruise was a very magical experience and my kids enjoyed every second. There are so many uniquely Disney Cruise things I want to mention (laundry rooms, private island, pool zones, fireworks), but maybe I will save that for a part 2 post to answer reader questions. Happy sailing!

The Sassipotimus: My Battle with Toddler Sass

Is it ok to be scared of the world?