Growing up, we didn’t go out to dinner very often, mostly because we couldn’t afford it. The times we went out were usually special occasions, and we were expected to behave and engage at dinner with the celebrated party. We were allowed crayons and occasionally books to pass the time. But really, what did our parents do to keep us manageable for the duration of the meal? Hangman? I spy? Claw machines à la West End Cafe, anyone?

While times have changed, I have not.

We don’t go out to eat very often for several reasons, but there are two really big ones. One, we don’t really have room in the budget to eat out. Two, dragging one-year-old twins and a four-year-old to a restaurant isn’t exactly what I call relaxing, and it isn’t worth the trouble unless we are joining very understanding friends or family. I should probably put on my flame-retardant suit for what I’m going to say next.

My kids are not (and for the foreseeable future will not be) allowed to play on devices when we go out to eat.

That’s right. I deleted all of the apps off my phone, the iPad stays at home, hidden, and I make my kid engage with us without a screen. My kid doesn’t even ask “do you have games?” because the last time I had them on my phone, he was two. He doesn’t even realize that I can put them on my phone. The number of times random kids have asked me if I have them and then stomped away unhappily is pretty large. Grumpy old Aunt Lindsay strikes again.

I get the need for screens, oh, do I. 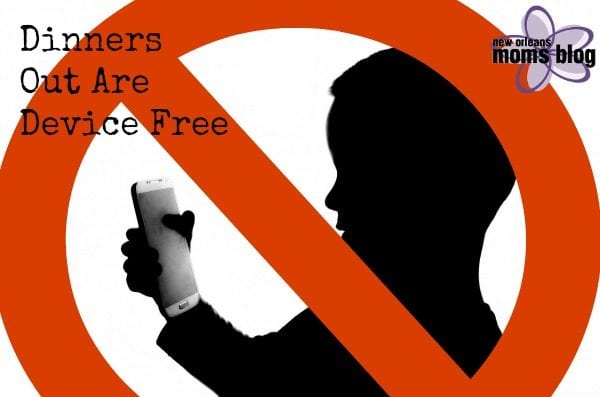 There will be no side-eyeing of young kids playing with screens at dinner from me. Toddlers and preschoolers are loud and nearly impossible to entertain long enough to eat a meal, let alone engage in an adult conversation that lasts longer than three sentences without interruption.

What I don’t understand is the headphones and the complete lack of engagement. A few days after Christmas last year, I watched a family of four enter the small restaurant we were in and sit down. Without saying a word, the mom reached into her bag, pulled out two iPads and two sets of headphones and then handed them to the kids, aged 8-11ish. Not a word was spoken between the parents and kids or between the kids to each other the entire time. They ate dinner with headphones and iPads on. When they were finished, mom packed up the gear, and without saying a word, they all walked out.

Before you say, “Ok, you don’t know their situation. They could’ve been special needs kids and that was the only way mom and dad were going to enjoy a meal out.” You’re right, they could’ve. I figured it was a fluke or that they had a special set of circumstances I couldn’t judge. But the thing is, I’m seeing it more and more: kids that don’t know how to have conversations with adults, or sit down and behave while they’re out.

How will they learn if they aren’t made to try?

To complicate things, our team learned a few weeks ago that many people hold the viewpoint that people with kids just shouldn’t be out. So again, I wonder, how are kids going to learn situational behavior if their parents are supposed to wait until they’re older to go out for dinner? I’m sure the demand for kids to be kept quiet drives a lot of parents to resort to devices. Did the same pressure exist when we were kids? Once again, we face a parental Catch-22.

Then there’s the kids who are allowed to run amok (you know the type) that annoy the entire restaurant. I’m not saying that kids can’t be kids, but I definitely think that there can be a balance between letting them make it rain with the contents of the sugar packet holder and completely zombifying them with headphones. It doesn’t have to be an either-or situation.

My kids don’t know that screens are an option, and I like it that way. Dinner out is probably harder because of my choice to keep it screen free. I’m sure we’ve annoyed another table or two… or five. But I do believe it’s possible to do dinner out that way. So for now, there will be no kids fiddling with devices at dinners out for us. Maybe I’ll change my mind one day and I’ll eat this post for dinner. At home, of course.

Switching Schools: Did We Do the Right Thing?