When you’re not little girls anymore and you see me naked, there’s a lot I want you to know about your early relationship with my boobs. The short story: You know how beautifully ginormous Aunt D’s and Aunt J’s boobies are? Well, I wore a bra long before they did, but their chests kept growing long after mine stopped! My boobs were barely a B for my early adult life, then they were milky and full when I was breastfeeding you. I imagine you’re reading this as teens, which means you’ve been weaned for over a decade now, and if what I hear about post-breastfeeding boobs is true, mine won’t need a bra and I won’t have to worry about sagging! 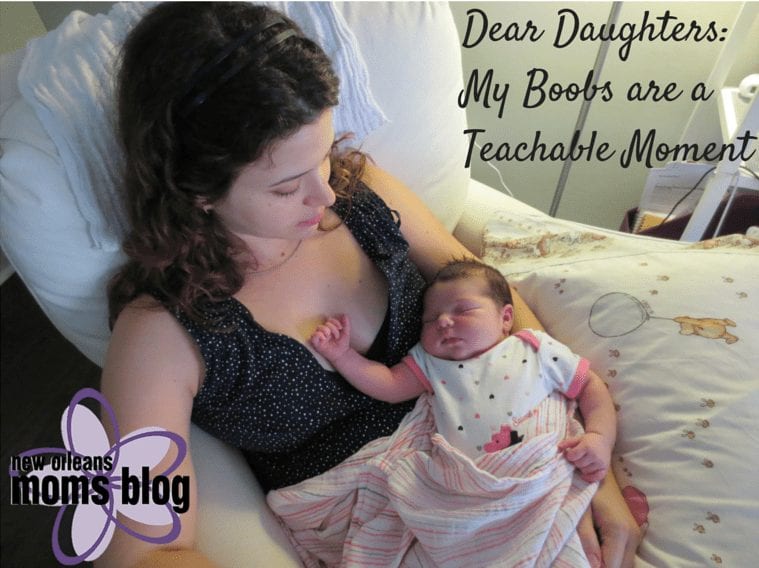 When I was in my teens, I wore padded bras and would stand in front of the mirror pushing up, wishing for cleavage. As I got older and noticed how admirers would often check out a friend’s big chest before her face, I began to better appreciate my petite size, and eventually stopped wearing padded bras. Since the first hour I was a mom, when E latched with such beauty, any negative thought I had about my boobs was erased as I found out how bountifully they could nourish life. Two years later when V was born, she gained so much in her first weeks that our pediatrician looked at me wide-eyed. “I make a lot of milk,” I said proudly.

E, you loved breastfeeding so much that whenever you saw my bare boobs, your eyes would tear and you’d need to drink again. You’d sign “hooray” while slurping, and would nurse anywhere, anytime. We had our share of extreme difficulties: an 8-day nursing strike during a bout of Hand, Foot, and Mouth disease, and the gash you put in my breast when the arrival of four top teeth taught us that you had a lip and tongue tie. I pumped through the first crisis and suffered through ghastly pain with the second since you wouldn’t take a bottle (likely due to the ties), before your ties were lasered away (technically called a frenectomy). But since I couldn’t imagine how I would mother you without your beloved “Mama milk,” we came out of those dark tunnels full steam ahead, and many more joyful nursings followed.

I’ll never forget your teary face and my sick stomach the morning I told you there was no more Mama milk. You were 19 months, I was 20 weeks pregnant with V, and my milk was drying up. You spent the rest of my pregnancy asking me to pull down my shirt so you could kiss each boob, and then my belly. We cuddled in the nursing chair more that summer than when you were breastfeeding, and those memories make me swoon.

V, you’re an efficient breastfeeder who rarely nurses for comfort, and I’m proud to say we’re still going strong at 11 months and five to six nursings a day. I love your sweet nursing sounds, and how the back of your head fits like a puzzle piece in my hand. Our initial breastfeeding struggles were slight compared to what many moms experience, but they still weren’t easy. I remember your first few months when my left boob was a geyser of oversupply making to too hard to nurse in public so we barely left the house. In addition, your latch took lots of work, so I couldn’t nurse you in the dark.

When you were six months old and sleeping so much that your weight became perilously low, I pumped four times a day to up my supply and added dream and middle-of-the-night feeds. It turned out you really are just a huge sleeper and that my supply took a nosedive because of it. I moved heaven and earth to save our breastfeeding relationship then, and I succeeded. Even though your weight is fantastic now, I’ve kept up the dream feed. I sleep better when my boobs are less full, and it’s a sweet way to end the day – your dad and I go together, and he takes you out of your crib for a stolen moment of bonding. Sometimes you hug him, sometimes you push him away and lunge for me in the rocker.

Your lip and tongue ties, which we had lasered at eight weeks (and which in addition to nursing issues can cause speech, chewing and dental issues), have grown back and nursing has become painful again. As I’m writing this, your second frenectomy is still two weeks away. While the pain isn’t as devastating as it was with your sister, I’m counting down the nursings until then.

Knowing the kind, empathetic children you already are, maybe you’ll hug and thank me when you read this. But your gratitude is not why I’m writing. I hope that you’re learning a lifelong respect for your body by how your mom works hard both to have the body I want and want the body I have. Whether or not you have kids or nurse them, your body is beautiful inside and out and can do things you would never expect, and my most teachable example of that is breastfeeding you.

We all have our strengths and weaknesses, and it just so happens that breastfeeding is one of the parts of parenting that I’m particularly good at, and because of that, I’ve worked hard at it, fought for it, made mistakes, sought help, soul searched, and ultimately succeeded. Even if you don’t succeed, when you want something so fiercely, it’s worth putting in hard work and fighting for it. Sometimes the end goal is most important, or sometimes it’s actually the journey; but only hard work will take you where you most want to go. And now where I want most to go is to nurse V to end our day.

I love you dearly and fearlessly,

What are your greatest strengths as a mother?