Having young children is not something that I would call “easy.” They’re unpredictable, emotional, high-energy and at an early age completely incapable of communicating. This lovely combination of traits left me standing in the middle of Chipotle in utter disbelief this afternoon.

The Day My Kids Shut Down Chipotle

Rewind to late last night. My kids went with their dad, grandma and great-grandma for pizza after cabbage ball was rained out at the last minute. I didn’t go because I had a dinner date with a friend who was in town from Connecticut (which was lovely and rather necessary). While not privy to a firsthand account of the evening, I assumed they were fed a healthy portion of sugar and allowed to stay up much past their bedtime.

Around 10:00pm I get a text stating, “Braden just threw up in his crib! I think he got an old bottle and ate too much pizza.” Damn. So, I ended my night early and headed home to check on my baby. He was sleeping soundly in his crib. No fever. Out like a light. He got up at his normal time to come to bed and slept better than he had in weeks.

My plan for the next day (i.e. today) was to stay home and wait for a few deliveries I had scheduled for work while catching up on some overdue house work, basically the perfect day to lay low. The kids and I spent the whole day at home doing a whole lot of nothing. Around 3:00pm I finally decided that I needed to get out of the house as the kids were running up the walls and I was out of my gourd.

My family truly frequents Chipotle. Like, we’re known there. VIPs, if you will. I figured we could rush in and out like we always do. I could not have been more wrong!

When It All Goes Wrong at Chipotle

At first, it was business as usual, but as we made our way down the line, everything went to absolute hell. I was holding the baby facing forward and out of the blue without even an ounce of warning he started projectile vomiting. And it went absolutely everywhere. All over the sneeze guard, all over the floor, all over me. EVERYWHERE!!! 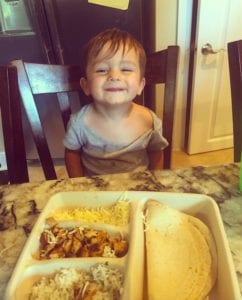 There was a lovely family behind me who ran and quickly gave me a stack of napkins and kept reassuring me that “it was fine, he’s a baby, it happens all the time!” I never did get to look them in the eye. I was simply too embarrassed. All I could say was, “I’m sorry! OMG! I’m SO SO sorry! What the heck!? I’m so sorry!” I would love to see them again and really thank them for their support, as the ordeal would have been 10 times more horrifying had they not been so understanding.

The General Manager was on duty and came to my aid like a knight in shining armor! He assured me it was okay, took care of all the customers in the restaurant and – wait for it – CLOSED THE ENTIRE RESTAURANT! Yep. You read that right. He closed down the entire restaurant AND stationed someone outside to inform incoming guests that they had an “incident.” As in my child had shut down the whole darn joint. I was mortified, but he was so right. There was no way he could have served food from that line.

This man handled the situation with ease and grace. He pulled me out of my disbelief and told me it was ok. Chipotle has a procedure, and they were closing the restaurant down, throwing away all the food, bleaching everything and they would just have to start from scratch! (Kill me!) He got my information and told me he’d be calling to check on us for the next few days.

My Take From All the Chipotle Chaos

I don’t even know the moral of the story. What do you do?! Sometimes being a parent is impossible. My baby is too young to communicate that he’s feeling sick. He didn’t have fever. He wasn’t symptomatic. I just thought we were going to get a healthy lunch! I’m sure there are some sancti-mommies out there who would have known their child well enough to have predicted this, but that wasn’t me. I truly did not see it coming.

I offer my sincerest apologies to Chipotle, but also; we need more customer service like this. The General Manger really did everything right. As a human, as a manager, as the head of a restaurant. He nailed it. We have been and will continue to be regular customers. I thank you for your humility and understanding … and delicious non-GMO burritos!

Just this week I was with a mom who had somehow locked her children in the car. She, too, was cringing at herself for the fuss that was being made over her ‘mistake’ (which was more likely a random kick of her child’s foot at the automatic door lock button at JUST the right time). I was fast to tell her that it was fine, no big deal. But now that I’m the one who is messing up royally, I was hanging my head low and humiliated. This week has really opened my eyes to the pressures we feel as moms to be perfect and the fear of judgment we all harbor.

Going forward, the next time I raise an eye or consider judgement, I’m going to think twice. I’m going to lend support and offer understanding. I’m going to be more like the manager at Chipotle. His grace made my horrible, awful day a little less horrible. I hope to be able to pay that forward soon!

Waxing the City {A Sponsored Review}