With baby number one, expectant parents are exposed to so much advice. Some recommendations you take and treasure, while other advice you ignore as soon as you hear it. There are factors in that decision equation such as the source, the examples shown and the research on what advice you listen to. Swim lessons and how to approach water safety is just one of the million things we have to navigate as parents. 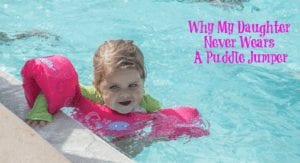 I enrolled my first born in swim lessons when she was one. I went to a swim instructor that came highly recommended from someone I trusted. Plus, I had seen little bitty children who went to her that could swim, which … what parent doesn’t think that’s a pretty cool outcome?! Based on the recommendations and the research, this was a perfect fit for us. So we signed up and eagerly attended her swim lessons. We ALL went to her swim lessons. Yes, we were the family with the one year old in the pool with both parents on the side and both sets of grandparents watching. I may or may not have had the DSLR camera in hand as well. Nope, an iPhone photo wouldn’t do.

The instructor, or “The Swim Whisperer” as I affectionately called her, had our daughter swimming to the side of the pool in the first two classes. She was adamant that when lessons ended we should continue to expose our daughter to swimming in order to continue to develop her skills. Our instructor also had two rules that we were to follow. Number one was … NO goggles. Her reasoning is that if your child ever fell into a pool, they would most likely not have goggles on. So the child would panic because the water hit their face instead of swimming to the side safely. If children are comfortable and at ease with water in their face then they are not be as likely to panic from that particular factor.

Her second rule was no puddle jumpers or floaties. Yes, you read that correctly. Her reasoning with regards to this advice is that puddle jumpers and floaties give kids a false sense of security because they sit higher up in the water. Then, when they don’t have the puddle jumper or floaties on, like when learning to swim, they are uncomfortable and scared because it feels unfamiliar and not as secure.

You know what? We followed her rules precisely. My nearly six year old has never worn goggles or puddle jumper. She is a great swimmer, so parental mission accomplished.

All of that said, we now have two daughters and our youngest is a toddler who keeps us on our toes. Our six year old NEVER wore a puddle jumper but now I am nervous with man-to-man coverage of parents (2) to children (2) in the pool. Our second daughter is quite the handful, and her legs never stop moving. So as the parent who never put their first child in a puddle jumper, I am stuck between a rock and puddle jumper.

I know it sounds silly, I really do. This is not a monumental decision on the road of parenting. But I so deeply treasured this advice with the first child and I saw that it was effective.

But what works for one child doesn’t always work for the next … so you may just see my daughter in a puddle jumper this summer!

Tell me :: are you on team puddle jumper?