I met my husband, Mark, when I was just nineteen. At that time, the only thing I knew for certain about life was that I would spend the rest of mine in New Orleans. On our first official date, Mark mentioned that when he finished medical school, he would be setting off on a world tour with the US Navy. I remember thinking that he, and our date, really were too good to be true. I had no desire to leave home and join him on his journey, but, date after date, as we grew closer, I came to realize that nothing in life is certain. 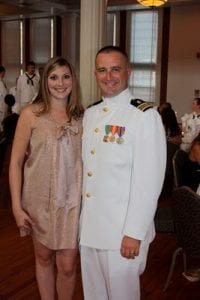 A little more than a year after we were married, Mark and I set off on that world tour he spoke of. The US Navy assigned us to Naval Hospital Beaufort. Beaufort is a sweet and cozy community nestled halfway between Charleston and Savannah. It is home to the naval hospital which supports Marine Corps Air Station Beaufort and Parris Island Marine Corps Recruit Depot. It is here where they make Marines. It is in Beaufort where I learned what sacrifice, honor, duty and freedom actually mean.

You see, for four years, I was surrounded by the brave men and women who chose to serve our great nation. During a time of chaos and war, Parris Island continued to welcome the fresh, young, innocent faces of the boys and girls who chose to join the ranks of the Marine Corps. After thirteen weeks spent on the island as recruits, they would stand before their family and friends during their graduation and become one of the few, the proud, the Marines. There is nothing more humbling than meeting a new Marine. The pride they have to fight for our freedom is unparalleled. Imagine being eighteen, knowing that you will most likely be serving as an infantryman in Iraq or Afghanistan, and making such a selfless choice. Here, I had gone to Beaufort kicking and screaming because I don’t like change, and these recruits were so willing to go to such greater lengths for me.

During our four years in Beaufort, we came to love the world of the military. We met such amazing people. We saw so many give up so much. It was hard to imagine a life without the sounds of fighter jets flying above us. And how would we get used to getting groceries anywhere other than the commissary? How would we return to a life where we weren’t reminded on a daily basis how lucky we are to be Americans?

As we transitioned back to life in New Orleans, Mark and I both found that we missed the military more than we thought we would. We knew we had a lot on our plates adjusting to our new employments and settling into our new home, but there was this lingering desire for Mark to serve again. So, in January of 2011, Mark joined the Louisiana Air National Guard. A few weeks later, we discovered I was pregnant. It was then that we knew the choice to serve was more important than ever. 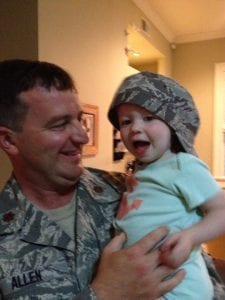 Every time Mark puts on his uniform and goes off to be with his unit, I tell Jane about how brave her Daddy is. To have a hero in our home is priceless. Jane will grow up never taking for granted that her freedom comes at the service of others. She will learn that the world in which we live is bigger than we are individually. She will see that our nation is great, but that for it to be that way, a select few brave men and women make it so.

As we celebrate our nation’s independence, I’d like to say a million thanks to all of those who serve our country. Thank you for keeping us safe. Thank you AND your families for moving, for time spent apart, for the fear in which you live … so that we may feel safe. Thank you to your spouse for supporting you, for being a mother and a father when you are away, for always encouraging you to recommit to your service. And above all, thank you to those who have paid the ultimate sacrifice.  You are not forgotten. It is you who we remember and celebrate. You are our heroes.

There is no way to say thank you enough…

Baby’s First Haircut: How Do You Know When It’s Time?