Surely, as their MOTHER, you can tell them apart. 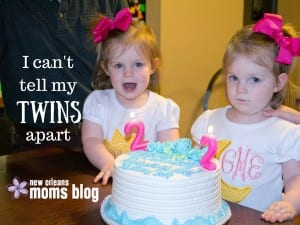 Surely, I cannot. Ok, so that’s not entirely true. When I’m within three feet of them, I can. Usually. It’s when they’re across the room scaling furniture, beating the dog with their toy broom, or climbing inside the dishwasher to “help” that I have no earthly idea which name to yell. My dear friend jokes that we are like the Berenstein Bears, because we often just refer to the girls as “sister.” It’s true. It’s easier to say “SISTER, NO!” or “Sister, come clean up!”

When I was pregnant, the doctors assumed that the girls were fraternal because I had two sacs and two placentas, which is referred to as a di-di (dichorionic-diamniotic) pregnancy. However, there’s a 10-20% chance in di-di pregnancies that they are identical, and in those cases, the egg splits prior to implantation. When they came out, they were three ounces apart and looked exactly alike. The OB said to ask the on-call pediatrician if they were identical; the pediatrician said the OB would know. The staff geneticist told us to order a test off the internet. We decided to wait it out and see of they changed as they aged. They looked more alike as time passed. They are as identical as identical can be; so identical that our pediatrician told me not to waste the $125 on the DNA test after all. We are the 10-20%. 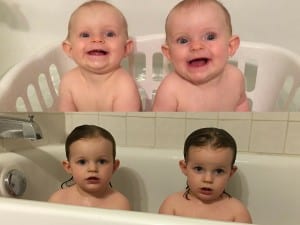 How do you know they haven’t been switched?

That’s a question I get constantly. G was born first and she was labeled with Baby A on her hat and her hospital bracelet. KC was Baby B. While we were still in the hospital and labeled, a nurse told us to paint a fingernail and a toenail on one twin only. Lucky G got the polish, and we kept it painted until KC developed a hemangioma on her head around two months. My mother-in-law had ID bracelets made for them that they wore upon their release from the hospital until they were 18 months old. We got their ears pierced at four months old and now G has gold earrings (G, gold, get it?) and KC has silver. I can say with 100% certainty that we have never switched them. I’m not telling KC about that hemangioma that’s now hidden by her hair – I’ll keep that secret until they try to switch themselves or discover it on their own.

How DO you tell them apart?

There are fluid ways I can tell them apart. KC has always had more teeth than G, but that clue’s short lived. Freckles help, but they get new ones every month. Their personalities are different, but they swap qualities right as I establish who is the “fussy one” or the “more verbal one” or the “active one.” I used to be able to tell who was KC simply by the way she constantly ran up to me and said “Mommy?” followed 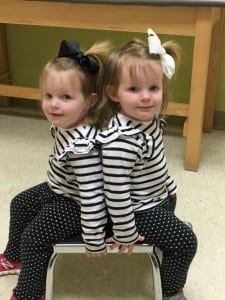 by a kissing noise and a sweet kiss on whatever part of me was closest to her face. Now G does that and KC doesn’t. On the days I dress them alike (that’s an entirely different post), I make sure at least one thing is different: shoes, bow, hairstyle, etc. It’s a quick way to determine who’s who in a hurry. On the days I dress them differently, I memorize who is in what color.

Seven Things That Make Being a Daycare Mom Easier