New Orleans Mom is the premier parenting website for families that live, work and play in New Orleans. If you’re looking to visit New Orleans with kids on your next vacation, we’d love to help you plan your trip to New Orleans!

Many of you know that your dreams during pregnancy can get a little wacky. I forgot about this side effect of pregnancy until I became pregnant for the second time and starting having some really weird dreams – like “a giant spider turns into the kidnapper from Chitty Chitty Bang Bang and tries to become my best friend” weird. 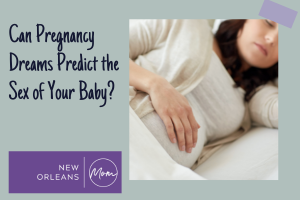 I know that hearing about other people’s dreams is not the most exciting thing. I, for one, have been known to sigh and roll my eyes when people ask me if I want to hear about their dreams from the night before. That said, you’ve got to hear about my dreams! I am convinced that my pregnancy dreams have predicted the sex of my babies.

When I was pregnant with my first child, I had very vivid dreams. And in every one of them the baby I was carrying was a boy.

Dream #1: We found out the baby was a boy during the ultrasound. He smiled at us and, surprisingly, had a full mouth of braces.

Dream #2: I bought a bunch of girl clothes before the baby was born. Cut to a year later, my husband is fussing at me for dressing our son in all of the girl clothes.

Dream #3: What we thought was a third leg was actually an abnormally large baby penis. The doctor marveled at its size.

The verdict? When my husband and I went for the anatomy scan, I felt in my heart of hearts that I was carrying a boy. Before the ultrasound tech even announced the sex, I said, “It’s a boy, right?” I honestly felt like my dreams were my subconscious telling me what to expect. My dreams were right. I delivered a little boy in 2013 and there’s lots of things to love about being a boy mom.

I am now in the third trimester with my second child. I didn’t dream about the sex of this baby until late into the first trimester.

Dream #1: I was at the hospital walking up and down the hall with my husband a day after giving birth. We were discussing names for the baby. They were all girl names. When we arrived at the nursery to look at our baby, we picked up a beautiful baby girl who smiled up at us with the most jacked up set of teeth we’d ever seen. Then we started wondering if there was such a thing as orthodontists for babies. (What is it with my “babies with braces” dreams???)

Dream #2: In my second dream, I was shopping with my daughter, who just happened to be Madeline from the children’s book series. 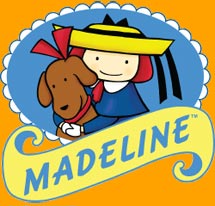 So, did my dreams predict the sex of the baby the second time? Yes! A blood test and an ultrasound confirmed that we are expecting a baby girl this fall!

Maybe this is just a bunch of hogwash. Maybe it is just a coincidence that my dreams were accurate. Or maybe the little babies growing inside of me were telling me something. All I know is that if I get pregnant a third time and my dreams once again predict the sex of the baby, I will be convinced that it is a scientific fact that your dream can predict whether you are having a boy or a girl. And you will not be able to persuade me otherwise.

What about you? Did your pregnancy dreams accurately predict the sex of your child?

6 Apologies to People I Annoy

The Ultimate Guide to the Best Playgrounds in New Orleans