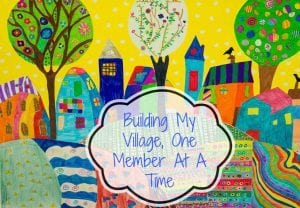 According to an African proverb, “It takes a village to raise a child.” Recent events have me thinking about my “village.” Who is in my village? Does my village *have* to include people I don’t know or specifically invite? If I don’t have any family in town, do I still get to have a village? Does the village mentality even exist in this digital age of being alone together? Or do we all just like to go online and preach about the village while ignoring the lady sitting next to you at the park who has children the same age as you?

I am a transplant to New Orleans.

Before living in New Orleans, I lived in Washington, D.C.. I moved to Washington from New Jersey, where all of my traditional village resides. I spent the first 25 years of my life in New Jersey. I love my family and I love my friends there but I made a conscience decision to leave my village. While in D.C., I found a new village. As a single lady who worked at a place with lots of other young people, it was easy to make friends over working long hours and cocktails. I met my husband in D.C., which was where he evacuated to after Katrina. We loved the city but I could tell New Orleans was still in him. After getting engaged, he decided he wanted to move and I went along with it. I had only been to New Orleans one time but thought it was pretty great. When I moved here, the only other person I knew was my husband.

I had to rebuild my village.

In New Orleans, things are very different from the Northeast. I found that building my village here was hard! Everyone already knew each other. I had no idea why people were asking me where I went to school. The job I started at didn’t have anyone my age working there. I relied on my husband for friends. He had a bunch of them at his job so we tagged along. These people were the beginnings of my village. Then I got pregnant with my first and realized that not having a traditional village was going to make motherhood a little bit more difficult. I stalked out people in my neighborhood who might have kids. These people probably thought I was crazy. I found that once my daughter started daycare, I would have a built in group of people to try to be friends with. I am still friends with these people I met as a new mother 5 years ago. They are part of my village.

The second and third babies came along and so did a new job. I’ve been able to expand my village. My neighborhood has recently had an influx of children move in. Just by taking walks and chatting up my neighbors, I’ve found new, “villagers.” We have been going to the same grocery store for 7 years. The same people have been working there the whole time. They have witnessed our family grow. They know my name and the names of my children. They are also part of my village. The same thing goes for our favorite Mexican restaurant, which is across from our favorite wine store. And finally, I’ve found a group of “sisters” in the other ladies who write for this blog. They are definitely part of my village.

My point is, building a village from scratch is hard.

Some members have come and gone but others have stuck around for the long term. One of my original members is going to be the godparent to my son. I think that in order to build our village, we need to take a moment and say hello before deciding to judge from afar. Motherhood bonds us all together, but it should not also be the thing that keeps us apart. So next time you see a mom who may be having a rough day or hard time, give her a smile and ask if she needs help. You may just find the next member of your village.

Who is YOUR village?

To My Son As You Graduate High School :: Call Ya...