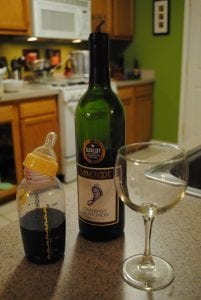 Yep, that’s wine in the baby bottle. Every evening after Nathaniel’s last breastfeeding session and before he goes to bed, I use one of his baby bottles to measure exactly a 5 oz glass of wine. After doing a plethora of research on the matter, this is the amount that I feel comfortable drinking while breastfeeding. I don’t want to pour too much; however, I don’t want to jip myself out of an ounce either! When 8:30 pm comes around, with my 5 oz of wine glass in hand, I encounter one of my most special and favorite times of the day with my son. I take him to his room, read him bedtime stories, press play on an endless cycle of rainforest lullabies, put him to bed, and say a prayer for God and his guardian angels to watch over him as he sleeps.

Nathaniel’s baby bottles help me to measure the perfect glass of wine, and they help me feed him, too. As I reflect on the journey of feeding Nathaniel these last 10 months or so, Dorothy and her journey back home in the movie, The Wizard of Oz, keep coming to mind. Only, instead of lions and tigers and bears, Greg and I dealt with boobies and bottles and spoons (sometimes with the same fear and trepidation as Dorothy!). While many think they must choose one path down the “yellow brick road” of feeding their babies (breastfeeding OR formula feeding), we found that it is possible to take more than one path to get to where we want to go. I believe this destination, for all moms (and dads), is one of giving our babies proper nutrition to grow and thrive.

At around 9:30 a.m. on May 10, 2012, the morning Nathaniel was born, he was wheeled in to my bedside as I was informed by the nurse that he was probably hungry. I had just been through 24 hours of labor, I was exhausted at a level I had never experienced before, and I was deliriously trying to bring all the information I learned in my breastfeeding classes to the forefront of my mind. Before I knew it, the nurse had put him on my breast, and he began feeding immediately with a good latch. I was relieved. She checked to make sure I was producing colostrum, and I was! I was relieved, again. 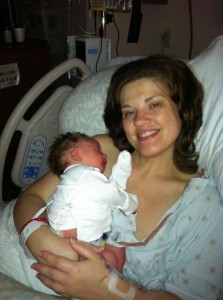 That first feeding went well, but I soon realized that all feedings would not go smoothly. The nurses were able to put him on the breast and get him to latch, but for me, it was hit or miss. Fortunately, after a call to the lactation consultant, I eventually figured this one out. I also began to realize the extent of the physical demands exclusive breastfeeding would be putting on my body. Not only was the act of breastfeeding physically demanding (nipple soreness, engorgement, etc…), but so was being the person to get up with Nathaniel every single time he woke up in the middle of the night. While doing exclusive breastfeeding, neither Greg nor anyone else could get up in the middle of the night to help. Even if we planned for me to pump and give breast milk by bottle in the future, during the first few weeks, we had to exclusively give him the breast to get the breastfeeding solidly established. We could not give a bottle, and to top that off, we HAD to wake him up every two hours to make sure he gained enough weight before leaving the hospital and during his first couple of weeks.

After the first week of exclusive breastfeeding and weighing the pros and cons, Greg and I decided to stay the course with breastfeeding, feeling the benefits would be worth all of the demands in the long run. Then, we went to see Nathaniel’s pediatrician when he was ten days old and received wonderful news: Nathaniel was gaining weight wonderfully and could now begin to have a bottle. I was so excited! I couldn’t wait to go home, pump some bottles and have Greg get up a couple of times during the night to feed him. I was going to FINALLY get some sleep!!

Apparently, not everyone is successful at pumping. Some people can get plenty of milk out when the baby is sucking and virtually nothing when they pump. I turned out to be one of those people. As a result, Greg and I were faced with the decision to continue exclusive breastfeeding or give him a bottle or two of formula each day. Initially, we stayed the course with exclusive breastfeeding, until the first night of the first growth spurt. It was about midnight, and I had just finished nursing him. He fell back asleep, and I laid him in his bassinet. Just as I had drifted off to sleep, he was awake and hungry, AGAIN! I was completely exhausted and frustrated, and I just started punching the Boppy pillow. When I was finished getting all of my emotions out, I gently picked up Nathaniel and fed him again. I cried, and I swear the look on his face was as if he knew how badly I felt. I didn’t want either of us to have to go through this ever again. I knew after this night, I couldn’t go on exclusively breastfeeding Nathaniel any longer.

Greg and I came up with a plan we decided on together. We needed a plan in which Nathaniel could still receive the benefits of breastfeeding, and I could get a break and get some sleep. Greg needed a good night’s sleep to go to work each day, and we also knew that with me being home and not working, we really couldn’t afford to exclusively formula feed unless there was no other way to feed Nathaniel. The new plan was for Greg to give him a formula bottle at around 9:00 p.m. while I rested. I would take my shift from 11:00 p.m. until 6:00 a.m., and then Greg would give him another formula bottle at 6:00 a.m., and he would take a shift until 7:30 a.m. Nathaniel took the bottle wonderfully (thank goodness!), and it doesn’t seem like I was getting much time to rest now while looking back, but during Nathaniel’s first few months of life, knowing I would have these breaks was just as much an emotional lifesaver as it was a physical one.

Nathaniel continues to breastfeed and bottle feed with formula even today at almost 11 months old. Although his feedings are fewer, and he needs much less milk these days, we are very happy with this compromise. Deciding to breastfeed and bottle feed with formula also allows us to feed him more easily in public and for others to babysit so Greg and I can have time alone with each other. Additionally, this feeding plan gives each of us a turn to sleep in on the weekends and to have a little “me” time every once in a while. It did take us a while to figure out the right formula. We tried three different kinds before we figured out, with the help of our pediatrician, that Nathaniel needed a hypoallergenic formula due to a cow’s milk protein intolerance. Moreover, we discovered, again with the help of our pediatrician, that Nathaniel needed rice cereal in his bottles because of severe acid reflux disease. However, even with these little bumps on our “yellow brick road,” we consider our course of breastfeeding and bottle feeding with formula to be a successful one that continues to be beneficial for the entire family. 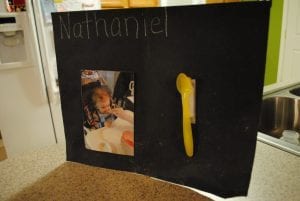 When Nathaniel was 6 1/2 months old, we decided it was time to introduce him to solid foods, beyond the rice cereal in his bottle. It was actually Thanksgiving Day, the perfect day for Nathaniel to eat pureed apples from a spoon. He did not take to it right away, and getting him to eat from a spoon actually prompted me to write a blog post about dealing with my feelings of failure because he would not eat from a spoon like so many other babies his age.

Today, Nathaniel is what many would coin a “good eater.” In addition to his breastfeeding and bottle feedings with formula, he eats organic/all natural baby food, finger foods and has even begun to eat table foods, such as red beans and rice, jambalaya, broccoli, and veggie spaghetti. 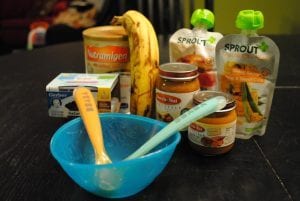 Feeding Nathaniel has not always been easy, but the journey has been worth it to see the growing, thriving, and happy boy he is today. There are many different paths to feeding your baby, and we chose the one that worked for our family. Just like Dorothy had the tools to get home the entire time she journeyed through Oz, we had everything we needed to give Nathaniel the nutrition he needed to grow and thrive. We just had to look inside ourselves, realize this, and to believe in what we felt was best. Although, I must say, I wished many times, it was just as easy as clicking my heels three times and saying, “There’s no place like home.”