What mom hasn’t worried how that precious child they’ve loved for months/years will adjust to the presence of a new baby? We recently welcomed home baby #3, so big brother Jack experienced his second sibling welcoming and baby Cora became a big sister. Here’s a look at what we experienced. 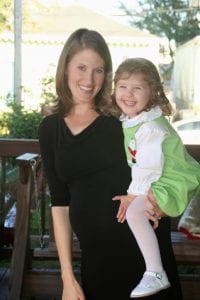 My approach was to share all about my pregnancy with my kids. We watched videos on Baby Center, we talked about how the baby would be born, we called our baby by his name, we guessed what parts were poking out of my belly, and we imagined together what life would be like once Luke was born.

Our kids came to visit about an hour after Luke was born. The baby and I were  still skin to skin. It was a little crazy, but the kids felt a part of this new change right from the beginning. Because I did start to feel a little overwhelmed, and since we were lucky enough to have two grandmothers in town, we planned that on day two, visits would be one sibling at a time. Jack came with one grandma and Cora came later with the other. This was way calmer, there was no competition for baby time, and we all enjoyed cuddling and meeting our new baby. 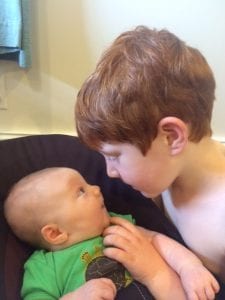 For some kids, it’s total. For others, it comes and goes. At age five, my son Jack has shown nothing but gentle affection toward his brother. His voice changes when he talks to him, he loves to help me by giving Luke his pacifier, and he hasn’t tired of asking to hold the baby. Cora has shown a very similar interest, but hers fades more quickly. I hardly have the baby in her arms before she says “all done.” She also gets frustrated if she wants something and I’m not coming because I’m tending to baby. In those moments, she says things like “No, Luke needs to stop crying,” or “Luke can get his diaper changed later.” She loves him just as much, but her patience is less.

From conversations with friends, this seems to be the hallmark of adjusting to a new baby. A younger child may stop sleeping through the night; an older child might start having fits of anger. This seems to depend on the personality, age, and possibly birth order of the sibling. This go-round, we experienced two of what I call non-linear effects of the new baby. At first glance, they might seem unrelated, but analyze them a little more, and they are entirely linked.

For Jack, we started noticing he’d quickly get angry when told no. He’d clench his fists, screw up his face, and yell, something we’d never seen before. While a new baby in his life alone probably wouldn’t have caused this, along with a new baby comes other changes. Mommy was tired and a little checked out the last weeks of her pregnancy. Grandma stayed with us and other family visited, making routines and discipline less consistent as the adult in charge kept changing. For a child who thrives on routine, each day was unfolding in different ways and with different expectations. And kids are smart. Jack probably sensed that he could push limits further and get away with more in the craziness of new baby days. When he would be told no, he was probably part angry, part confused, and part feeling out of control. Thankfully, this behavior started to disappear as his routines, even new ones, were put back into place. 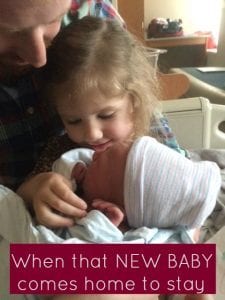 For Cora (a few months shy of three when Luke was born), we saw no new behaviors at first. She’d been keeping us on our toes with interrupted sleep and lots of willfulness pre-baby, but that seemed to be less in the first weeks after Luke arrived. (Thank you sister!) Cora thrived on all the extra attention. But we gradually saw some clear testing behavior. We’d tell her to do something and she’d tell us “NO.” We’d lay out a clear consequence, and she’d look us right in the eye and say “No, I’m not going to…” We soon found we were using all our known consequences and had even put into play our most dire threats. One afternoon, when I had resorted to spanking her for the second time, she immediately ran toward me with open arms crying “Mama!” with this look of “don’t you love me anymore?” I immediately scooped her up and hugged her, while wanting to scream: “YES! I couldn’t have warned you more clearly what was going to happen; why are you pushing us to the edge?!”

I’m very sensitive to Cora falling in the “middle child” slot. In conversations with other moms of three, it became clear to me that there is something to this birth order number. Your firstborn was your pride and joy, receiving all your love. Your second born never got that undivided attention and with the birth of a third, loses that special “baby” position. The middle child is both being asked to put their needs on hold for someone younger while also never getting to be first to achieve/try something. And with babies often coming about two years apart, they tend to be at an age of some challenging behaviors right at this critical moment. 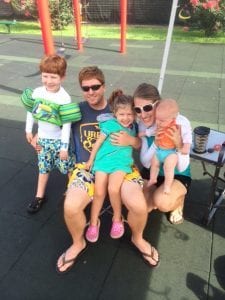 So we’ve been trying to stay very aware of what seems to be some insecurity playing out in actions. After those few days of escalating behaviors and consequences, we decided to switch our approach from punitive to positive. We gave both children a chart where they could earn stickers for showing respect, helpfulness, and/or kindness. We modeled that this meant saying yes when mom or dad asks them to do something and gave them some ideas of ways they could be helpful or kind. They loved the positive praise, and we saw immediate improvements in behavior. I think they both felt more empowered, and we found ourselves showing more awareness of their good behaviors which gave them the extra attention they needed with a new baby in their lives.

Adjustment to more disruptive, crawling baby? Thankfully, we have a few more months before that needs to be dealt with!

What behaviors did your children display when you brought a new baby home? What tips do you have to share?

ABOUT US
New Orleans Mom is a locally-focused parenting resource for moms and families. Passionate about parenting and our community, New Orleans Mom strives to connect area moms to relevant resources, local businesses, can’t-miss happenings, and most of all — each other!
Contact us: [email protected]smom.com
FOLLOW US
New Orleans Mom © - 2023
MORE STORIES