One of the many things we learned while Addison was in the NICU is that babies who have been on a ventilator or given strong antibiotics are at a higher risk for hearing loss. We didn’t really think anything of it until she failed three newborn hearing screenings. At that point, our pediatrician referred us to an ENT to find out if Addison did, in fact, have hearing loss. When the audiologist at the ENT’s office was not able to get a good reading either, we were then referred to the Speech, Language and Audiology Department at Children’s Hospital. Eventually, we had to do a sedated hearing screening at Children’s before any reliable conclusions could be made. Thankfully, the audiologist was able to get good readings and give us the great news that Addison’s test results showed no signs of hearing loss! 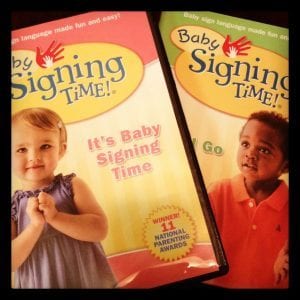 During this time of uncertainty regarding her hearing, we decided that even if the hearing test came back perfect, we still wanted her to be able to communicate through sign language. When talking with friends, family, and professionals about our desire to teach Addison sign language, everyone agreed on one thing: teaching a baby sign language is most important to prevent tantrums, since the key is for them to be able to communicate their needs and wants before they are able to speak. Our occupational therapist recommended the Baby Signing Time DVDs and suggested we start watching them with Addison daily when she was between six and eight months old. We have also encouraged our sitter to watch the DVD with her and use signs when communicating with her throughout the day. Addison just received volume two as a birthday gift, so now we alternate the two DVDs since we are still working on some of the basic signs.

It certainly isn’t as difficult as I imagined it would be either. The repetitiveness of watching the DVD on a daily basis has helped teach us the signs as well so that we can reinforce them. Even the most basic signs for “all done,” “milk,” “more,” and “please” have made hectic mornings and evenings in our house run smoothly. Many daycares also teach sign language and can be instrumental in providing parents with resources to be able to communicate through signing at home. Another advantage to teaching your baby sign language is that it instills good manners. Ashley, New Orleans Moms Blog co-founder, has nothing but positive words to say about teaching her son sign language. She said “to this day, Thatcher gets nothing without signing please. My hope is that by the time he is three, it will be so engrained that we don’t have to ask. And he already signs please proactively when he really wants something.”  What parent wouldn’t want that for their children? 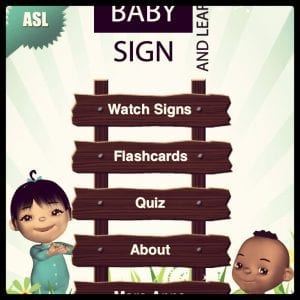 Since we live in such a technological age, there are plenty of apps for our phones and tablets that can be downloaded to help encourage learning it as well. I know I would much rather have Addison play with an educational app on our iPhones or the iPad, especially if it is relevant to what we’re teaching at home. We use the Baby Sign and Learn app, which is $2.99 in the iTunes app store. There are many others out there that vary in cost; you just have to find one that works best for you and your child.

A side note to Addison having trouble passing her hearing screening: this girl who would sleep through her apnea monitor going off in the middle night now has supersonic hearing and will wake up if she hears me drop my phone in the laundry room on the opposite side of the house. Go figure!

Now, who knows the signs for “Who Dat?” and “Throw Me Something Mister!”???

Do you communicate with your child through sign language? What tips or methods have you found helpful?

The Quarantine Effect: How not to go stir crazy when stuck...