I have always found it highly amusing when people call me Supermom for having triplets. As if I had any say in the matter! What they don’t realize is that having triplets, at least for me, is easier than having just one. Why is that? Well, because I’m lazy. 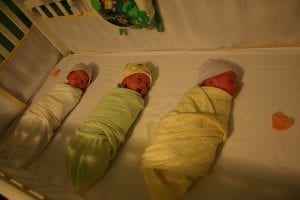 See, when you have triplets, you don’t have the luxury of rocking your baby to sleep. So every night, the boys were fed (sometimes all at once, but usually one at a time), swaddled, and put in their cribs awake. There was no rocking to sleep. From day one, they slept in cribs in their nursery while I slept blissfully (in two hour chunks) down the hall.

Speaking of cribs, while my friends with singletons were lamenting the transition to toddler beds at two, my three were safely ensconced in their cribs (some might say trapped, thanks to the crib tents that topped each bed) until past their third birthday. Toddler bed transition? With three? No way. I knew that I’d have to say bye-bye to naps as soon as they were free to roam, so I put it off as long as possible. And you know what? It was a piece of cake. They were so used to not being able to get out of their cribs that they assumed they weren’t able to get out of their toddler beds either. So they never did.

And let’s talk about potty training. I’d have happily kept them in diapers until kindergarten. Seriously, the thought of potty training three little boys filled me with more terror than Poltergeist ever did. And rightly so. The first time I tried to potty train them, a few months before their third birthday, there were many tears. All mine. I threw in the pee-soaked towel and tried again a few months later. Voila! Easiest thing in the world. I feel certain that if I’d had one sweet little boy, I would have probably attempted to train him at a younger age, because, well, that’s what my singleton friends were doing. 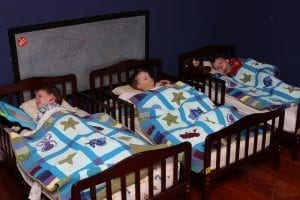 But the most important aspect of triplet parenting that makes it easier than singleton parenting is The Schedule. Even as we consider ourselves fairly flexible and easy-going, The Schedule ruled. The boys were on a strict three hour schedule when they came home from the hospital, and for the first few weeks, I thought, “this is so easy!” They were woken for their feedings, ate, were changed, then went right back to sleep. Every three hours, around the clock. As they got older, the schedule was modified. There was the four hour schedule, which meant I could sleep in three hour chunks! And then, as time went on, sleep at night went for longer stretches, and shorter during the day. With the support of my triplet moms, we figured out what worked best for them, and we stuck to it. Five years later, the boys still go to bed at 7:30 at night, almost without fail. 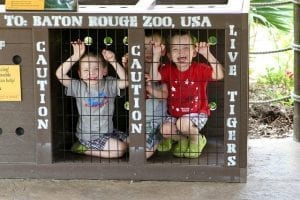 Not to say we haven’t been somewhat flexible. But as I watched singleton parents struggle with a cranky kid at 9:30 pm, I smugly thought of my three at home, slumbering peacefully in their cribs. (It’s possible my memories are somewhat hazy, but I like to remember it this way.) Sure, it meant they missed out on some events that went on past their bedtime, but it was worth it.

In the end, the best part about being a triplet parent is that everyone cuts you slack. A ton of it. No one judged me (to my face) for formula feeding the boys. No one blinked at three year olds that still slept in cribs and wore diapers. So many things that I would have gotten judged for if I’d been a singleton parent, I was given a pass for, since I had three babies at once.

Today, I have many friends having their third kids. They turn to me and say, “I don’t know how you did it!” as they juggle a preschooler, a toddler, and a newborn. But I just reply to them, “I had it easy. I don’t know how YOU do it.”

Five Amazing Reasons To Be Thankful!