The one thing that frightened me most about having children has proven to be true: lack of sleep. I can handle the craziness, the mess, the whining, etc., IF I have a full night’s sleep. In the last eight weeks since having my second son, Eli, I often wonder if I was insane to start all over. My three year old, Jude, is potty trained, feeds  himself and sleeps nearly 12 hours a night. We can easily go on a family outing and work it around his routine. When we decided to try for a second child, I was both excited and nervous. 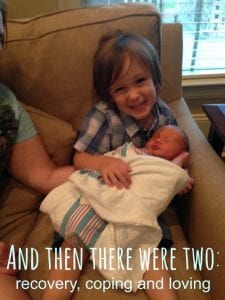 Cesarean after a vaginal delivery

My first delivery was a rather easy one, so you can imagine my frustration when my OB told me I would likely need a c-section. Gah! Eli was breech, and despite my best efforts to flip him (yoga inversions, large amounts of water, acupuncture, meditation, chiropractor), he arrived at 1:16 am on Good Friday via cesarean section. The first two weeks were the hardest; unable to pick up Jude like normal and afraid to sneeze for fear my uterus would come flying out of my body (obviously that can’t happen, but it sure the hell felt like it could). Once I was cleared to exercise, I was so excited, thinking it would definitely make me feel better and give me the energy I needed. I was disappointed to realize that not only was my stamina not there, but I was still hurting. I am taking it easy, doing light cardio and barre, hoping to eventually feel ready to kick it up a notch.

Becoming a family of four

I was pleasantly surprised to see Jude enamored with Eli almost from day one. I expected jealously and frustration, but instead he is such an amazing brother, calling Eli “his baby.” My husband took two weeks off work in the beginning, so that really helped me recover and focus on Eli while he focused on Jude. However, I found myself missing Jude quite a bit, feeling chained to the sofa or bed. I was afraid to admit that I had a favorite child at the moment, and it wasn’t the newborn. Jude was generally very patient, but at times he would grow frustrated when I couldn’t play planes, cars or Star Wars. Having help from family and friends in the beginning was a lifesaver, but eventually that dwindled and I’ve had to cope on my own. Eli’s feedings have improved, but it’s still a unique challenge, especially when Jude decides he needs to poop while I’m nursing. I’ve learned to multi task like a pro and accept the fact that laundry may not get done, dinner may not get cooked and food will often be on my floor. If I can remember to live in the moment and relax, there are some amazing moments to relish.

I am someone who needs their sleep. More like a solid eight hours. Lack of sleep does things to a person. There have been times where I really expected to start hallucinating or pass out on the kitchen floor. Eli still isn’t a good napper, and once Jude gets home from summer camp you can forget it. I have taken a nap maybe three times since he was born, generally not for more than 20 minutes. I am blessed to have good help with my business so I can take maternity leave, but as the owner I can never really “check out” even though I’m not firing on all cylinders these days. Part of me wants to get back to work, but the other part of me often can’t wrap my brain around it. I desperately want to be a functioning adult in society but can’t seem to figure out how. 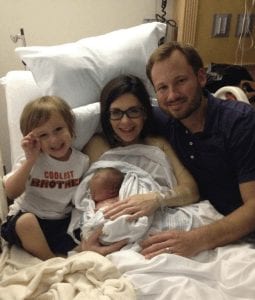 This too shall pass

While the first six weeks were really tough and at times I wanted to lock myself in my room, things have been easier with Eli than with Jude. I knew what to expect and am not as depressed as I was the first time, taking things more in stride. Nursing is going better and when I felt the need to supplement, I didn’t beat myself up about it so much. I don’t think my friends who gave their babies formula to be inadequate moms, so why should I?

I recently went on a bachelorette party for a good friend, pumping the entire trip. I even pumped on a boat and in the parking lot of a strip club. You don’t see that every day! I didn’t leave Jude until he was 5 months old, and here I was leaving Eli at 8 weeks. We partied quite a bit and I came home exhausted, but felt more prepared to go back to my routine.

I keep reminding myself that it’s all temporary, and I’ll look back on this time as a happy one. I’ll do the best I know how, and if I fall short, that’s ok. All the smiles and love make it worth it. But I fantasize about a night away in a hotel, all by myself. All I would do is order room service and sleep. Hey, a girl can dream, right?!

What was the biggest adjustment or challenge you faced when you had your second child?

Summer in a Glass: Wines You’ll Want to Sip on all...