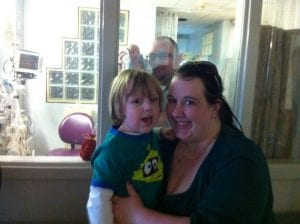 When I found out I was pregnant with my second son, I had picture perfect images of a smooth delivery transitioning into the first precious months of my newborns’s life. In my head, I could already see how everything was going to play out: my oldest son, Noah, would be wearing a “I’m the big brother” shirt on delivery day, holding his sweet new baby brother in a hospital bed with me looking over in complete happiness. There would be matching big brother and little brother shirts and cheesy smiles in every picture with Noah beaming with excitement of his new little brother.

Sadly, things didn’t go according to plan when Liam decided to arrive over 12 weeks early. Noah didn’t get to hold Liam in my hospital bed; instead, he had to wait a long 101 days until Liam was discharged. The first time he met his little brother was through a glass window, with his dad holding him up so that he could peer into the NICU. My memory of this “meeting” was just as special as the one I had envisioned but obviously different. He was beaming with pride as I knew he would, but the entire NICU experience had to be very confusing for a 3 year old.

As a mother, I know my attention shifted more towards Liam, not just with typical attention newborns require, but with the added stress of him being a micro-preemie. I was constantly worried about germs and developmental delays. My days were filled with specialist appointments and therapies instead of tummy time with Liam and playdates with Noah like I envisioned.

I know how hard those 101 days were for my husband and I, so sometimes I try to step back and imagine how hard this must had been on Noah. When I came across a similar interview on another blog, I decided that rather than imagining how he felt, I would ask Noah himself. In honor of World Prematurity Day, I sat down with my precocious now 5-year-old to ask him some questions about Liam and how it is to be a big brother to a preemie.

What do you remember most about the day Liam was born?

I remember GG (his grandmother) picking me up from school and telling me that the baby popped out of your tummy.

What do you remember most when Liam was in the NICU? 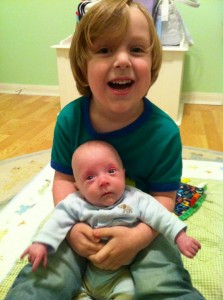 I spent LOTS of time at GG and Paw Paw’s house and with Aunt Mo. We would play a lot and do a lot of crafts. I would miss you and Dada though because you were always at the NIC room (Noah’s version of the NICU).

What do you remember about meeting Liam in the NICU?

I remember him being hooked up to many wires and that he was so small. I wanted to be able to touch him, but couldn’t.

How did you feel when Liam came home?

Excited. I was ready to see my little brother. I wanted to play and touch him. It was a fun day because GG and I brought over balloons, a welcome home sign and a cake.

Do you think Liam is different from other little brothers?

Yes! He is really tiny and small. I have to be very gentle and soft with him. I’m always reminding my family to use antibacterial before touching him.

What do you think Liam will be when he grows up?

I think he will be a baby doctor and take care of little babies in the NICU.

I know it has been a huge adjustment for Noah and Liam’s prematurity is still an issue at 2-years-old. Even though life hasn’t been picture perfect, it has been perfect for us. Noah is a fantastic big brother, and I hope he only has positive memories of Liam being born and in the NICU.

Why I Buy Coffee Daily

Facing Challenges Behind the NICU Doors :: September is Neonatal Intensive...