nursing strike (n) = a sudden refusal of the breast by an otherwise happily breastfeeding baby; can be caused by a number of reasons 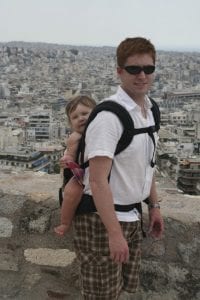 This summer, I flew to Athens, Greece with my 12 month old daughter Cora to meet my husband who was finishing up a weeklong course for his MBA. We spent several days in Athens and then on the Greek island of Rhodes, pretty relaxed and enjoying the time to be together. Cora, an easy nurser, was still happily breastfeeding 7 or so times a day. (Yes, I agree that’s a lot. Probably has to do with our baby led weaning approach.) Cora was actually nursing even more on the trip, and I could feel my milk supply increasing.

The night before we left Rhodes, I went to feed her and she wasn’t interested. I figured she was just over tired. At 3am the next morning, as we prepared to leave for the airport, I went to nurse her and she pushed away. With my milk supply on the upswing, all it took was these two missed feedings for red flags to go up. I was now physically a little uncomfortable and clueless as to what was going on. We put her in the car and figured I’d try again when we got to the airport. No dice there either. At this point, I felt like we needed to give her something else to drink, but she wasn’t really interested except for some sips of water. I was so engorged by this point that I stuffed socks in my shirt to help ward off embarrassing leaks.

As I was on vacation WITH my baby, I had no pump. Did I mention we were about to start 7 hours of air travel to Spain?

Once on the plane, I had to take action. I understood the theory of hand expression but had never really tried it before. My only option was to take residence in the airplane bathroom and try to figure it out. My hard won drops were happily sucked down by Cora from her water bottle. At this point, I was almost glaring at her! Was this arrangement not striking her as ridiculous?! Because it sure did to me!

The day continued as I ducked into airport and airplane bathrooms. I attempted to nurse her a few more times without luck. When we FINALLY arrived at our Barcelona hotel that afternoon, I was determined I’d get Cora to nurse. I googled “how to overcome a nursing strike” and tried most things on the list: nursing while swaying, nursing in the bath, nursing while she was sleeping. Every time, she pushed me away and cried.

I was physically in a lot of discomfort but the emotional part was worse. For the past 12 months, this is the baby who loved to nurse. And now within 24 hours, she seemed to hate the idea. I read over the list of possible causes for a nursing strike and knew that it would be hard to pinpoint one since the list included many possibilities. Sudden change of routine? Check. Disruption of normal sleep habits? Check. Recent illness? Check. (First ear infection.)

When all of my efforts failed, I picked up the room key and told my husband he’d see me again when I’d found a pump. Luckily there was a pharmacy right down the street and fortunately they had two pump options on the shelf. In my state of mind (i.e. desperate), I couldn’t remember any Spanish. I stood there with a Medela single electric pump in one hand and a manual pump in the other. After a few repetitions by the clerk, I gathered that the Medela was 105 Euros (nearly $150!) and the other was 8 euros. Argh! I had a feeling I knew which pump would solve my problems, but I felt like I had to at least try to make the cheaper option work. 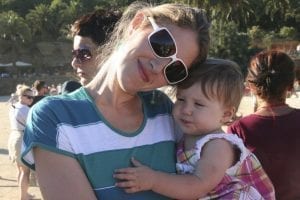 After a tedious pumping session, I felt better and we went out for dinner. Cora was fussy while we were out and about, but my offer to nurse her was declined, and not politely! At this point, I was near tears. Talk about a feeling of rejection! I held on to the notion that when she was ready to go to sleep that night, surely she would be ready to nurse again. Nope.

I felt like one of my last options was to sleep with her, on the chance that her instincts would take over and she’d nurse in the  night. Thankfully, in the dead of the night, she did nurse, almost immediately resolving all problems in my right breast. (Babies are a lot more efficient than an 8 Euro hand pump!) But in the morning, she was not interested in nursing again, so I made the call that it was worth spending $150 for a pump that would make me feel like a normal person, ensure we could enjoy our vacation, and preserve my milk supply. My experience and the consensus of the breastfeeding community is that babies wean gradually and that a sudden refusal of the breast is most likely a nursing strike, which in most cases can be overcome with patience and persistence. As my husband will tell you, I can be very persistent!

I also know from experience that there are no guarantees as every baby is different. It made me sad to think that Cora might stop nursing so suddenly. I’d nursed her brother until 22 months, and it had been a huge part of my mothering journey. My research said that most nursing strikes last two to four days. I was comforted by the fact that she had nursed once and decided to just pump and ride it out. But in the back of my mind, I knew this wasn’t just up to me. Maybe Cora was “done?”

I continued to offer throughout day two and Cora continued to refuse. This was the low point of our trip, as we were all feeling the strain of the strike. We came back to the hotel in the early afternoon so I could pump again. We went out in the evening and the mood changed. We all had a nice time. Cora fell asleep in the stroller on the way home. I carefully lifted her out and she latched right on. I was so relieved. I slept with her again that night and she nursed several times in her sleep. I woke up thinking she’d crossed the picket line and the strike was over….but then she smirked and wrinkled her nose when I tried to nurse her in the morning. 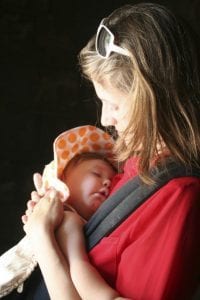 Throughout that day and the next, I could get her to nurse only while she was asleep. Otherwise, I had to pump. When we hit the four day mark, I felt in a murky place: she was on strike when awake, but nursed easily if she was asleep or just being awoken. The next day was our return flight home. At this point, I had stopped offering during the day. She started to cry as we were taking off. As we were trying several things to calm her, I cradled her and she leaned toward me as if she wanted to nurse. I offered, she accepted, and just like that came the end of our nursing strike. From that moment until now, two months later, she’s not shown anything but a love for nursing.

So what do you do if a nursing strike happens to you?

Stay calm. Keep offering, but rest your case in the moment if it’s clear your baby is not interested. Try again later. Try a different hold. Stand to nurse. Sway. Get in the tub. Lie down. Offer when your baby is sleepy. Sleep with your baby. (This is what really worked for me and Cora.) Be persistent. Most importantly, preserve your milk supply and nourish your baby. Pump when you would have fed your baby. Make sure your baby stays well fed. 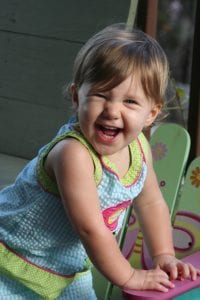 Try not to take it personally. Most of the time it will be hard to pinpoint exactly why the nursing strike started. It could be as simple as your baby having an unpleasant association with one particular nursing session (maybe they had an ear infection and the pain was worse when they nursed) and they need time to get past this association. You will be so happy that you persisted. I did not want the end of my nursing relationship with Cora to come all of a sudden and in a stressful way. These last few months have been so enjoyable. She’s reduced the frequency of her nursing sessions now that she’s a little older, but she’s become a cuddler, happy to stay snuggled up just for an extra dose of comfort after she’s had her fill of milk. I’m thankful I held my ground and waited her out.

If you ever find yourself in need of advice amidst a nursing strike, reach out to our La Leche League chapter at [email protected] You’ll know there is a sympathetic ear in this leader!

Photo Albums in the 21st Century: An Idea to Capture Your...

The birth story of my family blog and why I’ve continued...