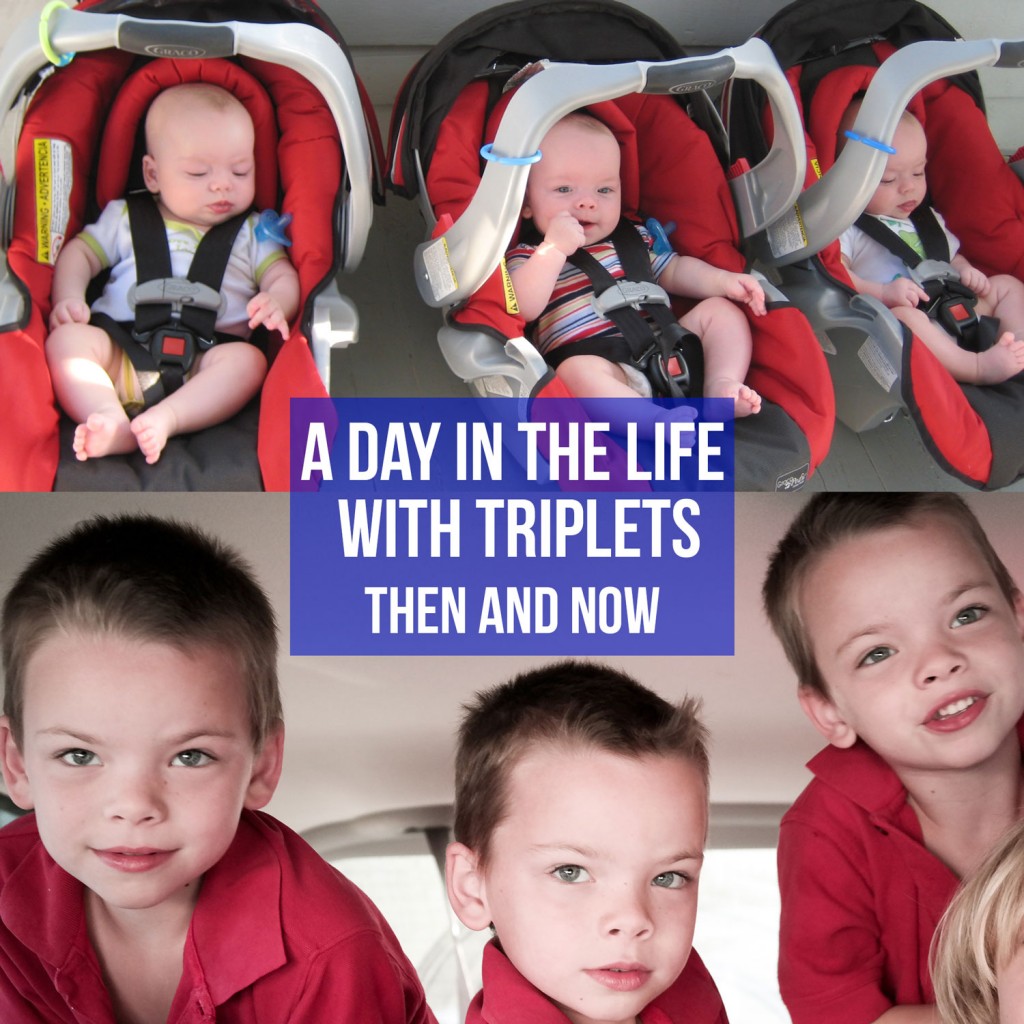 In honor of the last day of Multiple Birth Awareness Month, I’d like to share what a day in the life of a mom of triplets is like. I’ll share two perspectives. One from six years ago, when my boys were 4 months old, and one from today.

6:15 a.m.
2008: My alarm goes off, and I groggily get out of bed. The boys are almost sleeping through the night, but there’s still that one middle of the night feeding that keeps me from getting a full 8 hours. I shouldn’t complain, but zzzzzzzz….
2014: The boys’ alarm goes off in the other room. I consider this my pre-alarm and snooze for a few minutes until my alarm goes off. Wander into the living room where they’re all on the sofa, snuggled together under a blanket and debating the merits of Mario vs Luigi.

7:00 a.m.
2008: The boys have been up for about half an hour, and in that time we’ve changed diapers and clothes. Possibly more than once.
2014: After much prodding, they’re all dressed and ready for school, so we head downstairs for breakfast and getting bookbags, shoes on, etc. More prodding ensues.

7:15 a.m.
2008: What am I forgetting? I’ll remember later. Strap the boys into their carseats and attempt to get all three in the van in one trip. One infant seat in the crook of an arm, and the other two in my hands. No wonder I’ve got awesome guns now!
2014: I slop some Cheerios into bags and pour a cup of milk to be shared by all three. I carry three backpacks and lunchboxes out to the van and get them buckled in. My guns are in sad shape nowadays.

7:30 a.m.
2008: Drop the boys off at daycare and head to work. Peace and quiet at the office, except for ringing phones. But no crying babies, so I’ll take it. Even though sometimes ringing phones sound like crying babies. I need more sleep.
2014: Hooray, I’m not driving today! They get picked up by carpool and Mama is free for the rest of the day! Well, free to work, but mostly free of the sound of Skylanders and Sonic.

4:30 p.m.
2008: Pick up the boys from daycare. It’s a madhouse in there, but seeing their gummy smiles at the sight of Mommy melts my heart. They’re all wearing different clothes now, so I’m not even sure which kid is which. I’ll figure it out later.
2014: Maybe there’s such a thing as too much peace and quiet. After a day working at home, I’m happy to see the carpool pull up outside. The boys are home! Getting huge hugs and giddy smiles melts my heart still. Of course, they wear uniforms to school now, so I’m not sure who is who. I’ll figure it out later.

6:30 p.m.
2008: Bathtime? Nothing sweeter than the smell of a freshly bathed baby, but the logistics of bathing three babies is too complicated for today. Tomorrow will be fine. Baby lotion smells good. That’ll do.
2014: Bathtime? Nahhh, we did that a couple of nights ago. They don’t look too dirty. A washcloth’ll take off those snowball stains from their face.

7:30 p.m.
2008: Babies have been in bed for about half an hour. Once again, I thank heavens for The Schedule. They go to bed awake, without too much fussing. I consider the singleton moms out there who are rocking their babies to sleep. Not sure if I’m envious or if I pity them. A little bit of both.
2014: It’s still light outside? Argh. I’m ready for some Me time. I gently broach the subject of pajamas to the boys and I’m met with resistance. I threaten a call to the Easter Bunny to come pick up the Wii U, and jammies are swiftly donned.

8:00 p.m.
2008:  Time for OUR dinner. Oh, cereal is good enough, right? It’s fortified.
2014: Finally it’s getting dark enough for bed time to be considered. We troop in the tiny bathroom for toothbrushing, mouth wash, and face wipes.

8:30 p.m.
2008: I consider going to bed now, but decide against it since the boys have been sleeping pretty well. I turn on the TV and zone out.
2014: Into bed they go, after some pre-bed snuggling on the sofa with Daddy, and maybe a story or two (that they read to us!) Water is fetched from the kitchen, they climb into their triple-decker bunk bed, and I risk life and limb to tuck Linus into the top bunk. What a view he has from up here!

8:45 p.m.
2008: Did I hear a boy crying? I hold my breath and go into their room. All is quiet, just a little snuffling and grunting. Love those sweet baby sounds.
2014: I can hear the boys chatting and laughing in their beds. It’s heartwarming to hear them tell stories and giggle. I marvel over their bond, not for the first time.

9:00 p.m.
2008: Time for Mama to go to bed. Please sleep through the night tonight, please please please…
2014: Dammit boys, stop talking and go to sleep! Mama’s ready for some peace and quiet so she can read a book or watch an episode of Orphan Black.