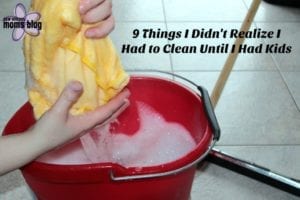 There’s a smell in the hallway, so let me get started. I have two kids, ages seven and nine. Like most kids, they make messes. I conquered the fear of germs early on, when I almost drowned after dozing off over a sink full of plastic infant toys.

I don’t clean for hygiene. Not anymore. Maybe one day I’ll be high-functioning enough to worry about the spread of microbes, but I prefer to tell myself that my kids have superior immune systems.

I’m talking today about cleaning that, left undone, would horrify any casual home visitor. Messes the sight, smell, or texture of which might make me so sick that I’ll have yet another mess to clean up. Here are the 9 things I didn’t realize I had to clean until I had kids.

When I got married, I bought a really nice cream-colored bedspread. Every day after work, its sleek expanse greeted me. Despite everything that went on in that bed, I don’t remember ever washing the bedspread until it became a weekly endeavor, shortly after the birth of our son. Instead of the usual fluids, let’s talk about the unexpected. Did you know that if your child has his face painted at a fair or party, no matter where he goes in your house, it’s still going to end up on your bedspread within five minutes?

2. Sheets, clothing, and hair of a sick child, again and again.

While we’re in the bedroom, let’s just keep going. I knew I’d be good with a sick child, because I’d always been pretty brave when friends got drunk and threw up. But I didn’t realize that it takes some kids a long time to learn how to throw up into a receptacle. I’m still waiting with the seven year old.

Related to #2, if you’re rinsing off a major mess in your utility sink, keep in mind that the job’s not done until you check the drain for solids. Or extremely viscous liquids. 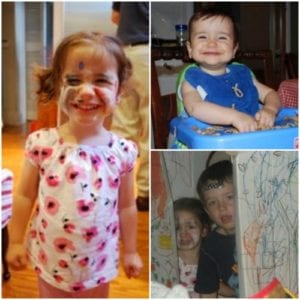 These are all items that children might touch without your noticing, after they’ve just wiped their noses with their hands, finger-painted, taken a break from a lollipop, or chased the cat under the house.

Not just the kids’ shoes, but everyone’s. When potty training, my son peed a waterfall into a new pair of shoes in the store’s parking lot. Also, while I’m at it, the newer the shoes, the more likely someone, anyone, will step in dog mess or throw up in them.

7. The kitchen counter, again and again.

Related to #6. My daughter is short for her age. This leads to her disturbing habit of traveling around the kitchen by skittering across the counters like a cockroach.

8. The hinges on the toilet seat.

I knew about the toilet seat. I had an older brother, a father, a husband. But the hinges? I have to remove the little plastic covers on the hinges, spray under them and let a yellow stream flow out, and occasionally remove the whole seat altogether and attack the toilet with a putty knife.

9. The insides of wastebaskets.

This one’s related to two of the above. About #8: My son has been known to mistake a wastebasket for a toilet when waking in the night. He’s also peed in a wastebasket “just to see what would happen.” He’s also peed into the wastebasket while, he assured me, he really was aiming for the toilet. In regards to #2, if I can stay alert around a vomiting child, sometimes I only have to clean the wastebasket. Not the sheets, bedspread, mattress pad, pillows, the child herself, and enough stuffed animals to start a cult.

If you don’t have kids and you’re still reading, don’t be tempted to use this list as birth control. It might have worked for me back in the day, but I can’t get up to irrigate the toilet hinges without pointing out one last thing.

If you’ve never seen a really foul mess, you’ve never experienced the joy of having tackled it. Household problems remind us that no matter how big, how sticky, or how smelly the problem, there’s always something you can do about it.

Even if that something is rolling a pee-soaked stuffed animal in the classified section and stashing it in the neighbor’s trashcan. 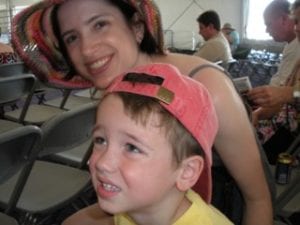 Lynn Adams lives in New Orleans with her husband and two children. She writes about quirky aspects of child development, including Autism Spectrum Disorders. Find more of her work on her website. Find her on Twitter and on Facebook .

I Think My Child Has a Learning Disability. What Do I...

Hug It Better {A Mom’s Response to the Words “You Are...