If any of these already exist, please let me know so I can squeal with joy. 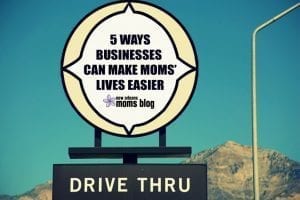 Loading a child in and out of the car in order to grab one or two needed items from the store is a major pain in the tuchus. The other day, I was picking up a prescription for my son at a drive-through pharmacy window. My sick, little fellow was asleep in the back seat. “Any chance you could grab some Infant’s Tylenol for me?” I asked the pharmacy tech. My request was politely denied, but it got me thinking that a drive through convenience window would be amazingly helpful to a busy and/or tired parent. I would rather be in my car waiting in a long line for milk than unload a sick child for a quick errand.

Speaking of sick children, let’s discuss the dreaded medicine syringe. Six months ago, Ben would take medicine like a champ. I would squirt the medicine into his mouth a little bit at a time and we would giggle and say, “Nom, nom, nom.” Easy peasy. Lately, though, Ben fights taking medicine as though he is fighting for his LIFE. He defies gravity and manages to run up AIR to avoid it. I practically have to put him a full body straight jacket just to give him a teaspoon of medicine. I’m currently on day five of a “twice a day for ten days” antibiotic regimen for an infection, and the two times a day I have to give him medicine are hands down the WORST parts of my day. The pharmacist who invents Cheddar Bunny Antibiotics or Topical Tylenol Cream will be this mom’s nominee for Humanitarian of the Year. 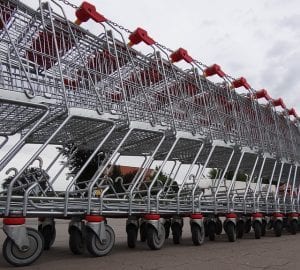 I will admit that (before I knew better) I used to set my son’s baby carrier on the top section of the grocery cart. The bottom of the carrier would hook onto the back of the seat and I would thread the buckle through the metal ring at the bottom of the carrier. I always kept one hand on the carrier at all times. I had seen other parents do this and thought that it’s just what you did when grocery shopping with an infant. At the time, I hadn’t heard or read about any horror stories associated with doing this. I will definitely be placing my next baby inside of the cart or wearing him in a baby carrier. However, it would be really helpful if grocery cart manufacturers and car seat manufacturers got together and figured out a universal, fool proof, snap and lock system so that we can safely attach carriers to the top of the cart.

Yes, another grocery cart request. I wouldn’t have imagined this a few years ago, but sometimes grocery shopping is the most relaxing, enjoyable part of my day. If Ben is being particularly rambunctious or we’ve had a rough morning on the playground, I love grabbing an iced coffee and leisurely strolling through the grocery store. The shopping trip would be much more enjoyable if I had a place to put my iced coffee. I can’t set it next to Ben because then he starts grabbing it and saying that it’s his coffee now. But if I put it in the bed of the grocery cart, it often tips over. It would be amazing if there were cup holders in grocery carts. I realize that the current grocery cart design probably prevents this feature because the carts need to be inserted into each other for storage, but if the guys figuring out the car seat feature could also tackle the cup holder issue, moms of the world would be very grateful.

My family loves going out to eat. However, at nearly 2 years old, Ben thinks he is far too mature to be refined to a high chair. He prefers the booth. Unfortunately, he gets very excited when he is in a booth and is extremely loud. I am perfectly happy dining to the soundtrack of my excited child, but I know that my fellow restaurant patrons would prefer it if that loud kid in the booth would put a muzzle on it. I know this is a ridiculous stretch, but wouldn’t it be great if restaurants had a sound proof booth section? Then Ben could shriek and laugh as loud as he wanted to without us eliciting dirty looks. And restauranteurs, if cost is an issue, I would pay extra for the sound proof booth. Just give me the sound proof booth menu prices, and I will be a happy customer.

Tell us, what could businesses do to make your lives easier?