My first pregnancy was really very easy. I found out I was pregnant in early June, and I was able to work exceedingly long hours during an intense time at work through the first trimester. Was I ready to pass out on the couch at the end of the 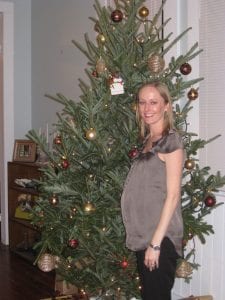 day? Absolutely! Did I take really long naps on the weekends? Of course. But overall, I felt great throughout my pregnancy with our son, and I really didn’t miss a beat. I worked up until the day I delivered, and besides being incredibly uncomfortable at the end, I didn’t have any major complaints. Because I had experienced such an easy pregnancy compared to all of the nausea, weight gain, swelling and discomfort I had read about, I was absolutely 100% convinced that my labor and delivery would be a nightmare.

I have an unreasonable dislike and fear of hospitals and all things medical, so I took the “ignorance is bliss” approach with my birth plan. My birth plan? Well, I was counting on showing up to the hospital, pushing when told to do so and delivering a baby with the help of experts. I honestly read nothing, planned nothing, wrote nothing and had zero plans for our son’s arrival. I didn’t want to tour the delivery wing of Ochsner ahead of time either because I knew it would just make me nervous. While I know that this would surprise those of you who know me as a planner, and while I also know that this approach would not work for many people, for me it was best. Yes, I know that knowledge is power, but I deeply trust my doctor and felt that she’d be able to inform me every step of the way. Besides, I was really busy at work!

On a Tuesday in February, I went to my 39 week appointment. Thatcher almost fell out of me right there in the exam room when my doctor informed me that A) she was leaving town that Friday and that B) she was absolutely positive I would not be pregnant when she returned the following week. I was due on February 16, but she believed I was very close to going into labor. She cut to the chase and said that I could either schedule an induction with her for that Thursday OR I could ride things out. While I may not have had a birth plan, I knew right then that riding things out and leaving my baby’s delivery to chance with a random doctor I had never met – no matter how fabulous – would not work for me. After discussing what an induction would mean in my case (I was extremely hesitant to receive drugs or be induced before I was ready), I decided to schedule it for that Thursday. As I left the office, I called my husband and said “holy crap – we’re having a baby!” He replied, “um, yes … you ARE pregnant!” To which I responded “no, I mean like soon! As in Thursday!” Silence.

I still remember driving down a very foggy River Road at 4:00am that chilly Thursday morning vividly. I was nervous, excited, anxious and yet calm. I trusted my doctor, she had assured me that I’d have a baby by the time people were getting out of work, and I knew that having her there would be immensely helpful for me. Showing up for an induction is a little bit 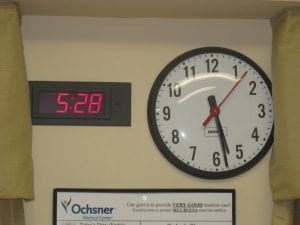 like checking into a nice resort: everyone’s all “oh yes, we were expecting you” and “let’s get you settled.” I was really impressed with how prepared and organized the labor and delivery area at Ochsner’s main campus was. After some paperwork, bloodwork and “settling in,” a resident came in, checked the baby’s position by ultrasound, informed me I was already 4cm dilated and broke my water at 6:15am. I remember so clearly her proclaiming “and we’re underway!” as she did so. And yes, I am one of those women who walks around extremely dilated with no signs of labor.

I will say one thing about having your water broken: if you ever think that your water has broken, it hasn’t. You will know when it has.

For the next 2 hours I tossed and turned as my contractions intensified. I will say one thing about contractions: if you think you are having labor contractions, you aren’t. You will know when you are.

One of our friends was in her residency as an anesthesiologist, and she came by around 9:15am. I remember her softly prodding me to ask for the epidural (I was pretty much zoned out and moaning like a slowly dying orca whale at this 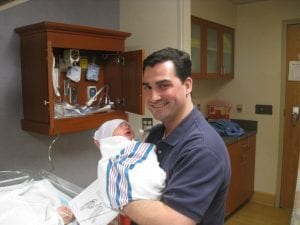 point), which I did. I hadn’t wanted to ask for it “too soon,” but after being assured that 6cm was not too soon, I took the plunge. The anesthesiologists came in and did their thing and I was soon in blissful delivery heaven. By the time my husband returned, I was a new woman. The next 2 hours were a shuttle of people in and out of my room, and they passed pretty quickly. Around 11:15am or so, my doctor came back to check me and said it was time to push. Whaaaaaaaaaaat? I really hadn’t felt anything since receiving the epidural, so I couldn’t believe it. I had to be guided through every push, and I really couldn’t feel much, but I was pretty lucid for the experience. At 12:41pm, a short 6ish hours after my water was broken, Thatcher William made his entrance. The heavens opened, angels sang and my husband cried. No, really. He cried. It was sweet.

I honestly couldn’t believe that it had been that “easy.” Don’t get me wrong: contractions hurt like hell, and recovery was not the most delightful thing, but I knew that 6 hours of labor for baby numero uno was pretty damn good. So I really never thought it could happen again. But…

I found out I was pregnant with Hadley in late March. Same story as with Thatcher: despite a different gender, I felt fabulous and worked full-time up until I delivered. Again, I was blessed with an easy pregnancy. So of course, I assumed 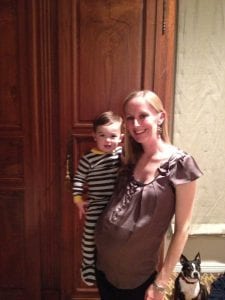 that I’d be that woman who has a fast first delivery and then labors for days with number two. I was even googling things like “chances of a second time delivery taking longer than the first” towards the end. A true sign of pregnancy insanity!

Since everything had gone according to my doctor’s plan the first time, I trusted her even more so the second time around. While she did NOT have a trip planned around my delivery date, she did know that I was anxious about not getting to the hospital in time for an epidural since my first labor had progressed so quickly. She suggested that I consider the same route again, so we did.

I checked into Ochsner (it was kind of like deja vu, really) on a Monday morning in November at 4:30am, only this time I had a birth to compare it to. I remember thinking “okay so with Thatcher X happened at Y time” and I’d look at the clock to take a mental note of whether things were generally the same. This time my water was broken at 5:30am (which was about 45 minutes earlier), but I honestly didn’t feel much pain at all and was worried I wasn’t progressing. I should add that I checked in at 5cm dilated (nuts, I know!) but was still concerned that the lack of pain must mean no progress.

After being encouraged to walk around a bit at 8:15am, I finally started to feel some intense pain and pressure. I called for an epidural at about 8:40am, which I received by 9:00am, give or take. They kept saying to me, “you should feel PRESSURE but not pain – is the pain gone?” and I couldn’t answer. I was sitting on the bed making contorted faces and looking at my husband to say “no the pain isn’t f-ing gone!” I truly think they were worried that something had gone awry until the resident had the presence of mind to say “maybe someone should check her.”

So the nurse calls for my doctor who is tied up while I scream “I just want to f-ing push” (no holds barred here, people!) and my husband tries to calm me down. My nurse makes the call to go ahead and check me herself and sure enough, I was complete. Insanity ensued and she asked me to please try not to push. Telling a woman laboring 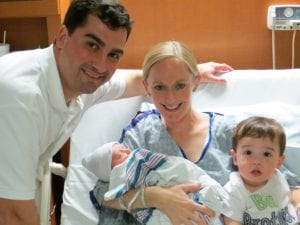 with very few pain meds not to push is like telling a dog not to bark. After what seemed like forever but was really probably 3 minutes, my doctor was there and basically just said to push when I needed to.

I will say one thing about the ring of fire. It got that name for a reason.

At 9:21am, less than 4 hours after having my water broken, and less than 30 minutes after getting an epidural, Hadley Jayne joined our family. We were so in shock from the speed of it all that no tears were shed (sorry, Hadley!)

I’ve come to the conclusion that IF we have a third baby (that’s a big if since we’re currently transitioning the toddler to a big boy bed and have a non-sleeping 3 month old), I should probably move into the hospital for the last few weeks of my pregnancy. My babies don’t waste any time being born, and I can’t say that I am anything but grateful for that! Not to mention, they’ve made our house a true home.

The Weight of Motherhood :: A Burden and A Blessing

Painting with Penguins: The Backstage Penguin Pass at Audubon